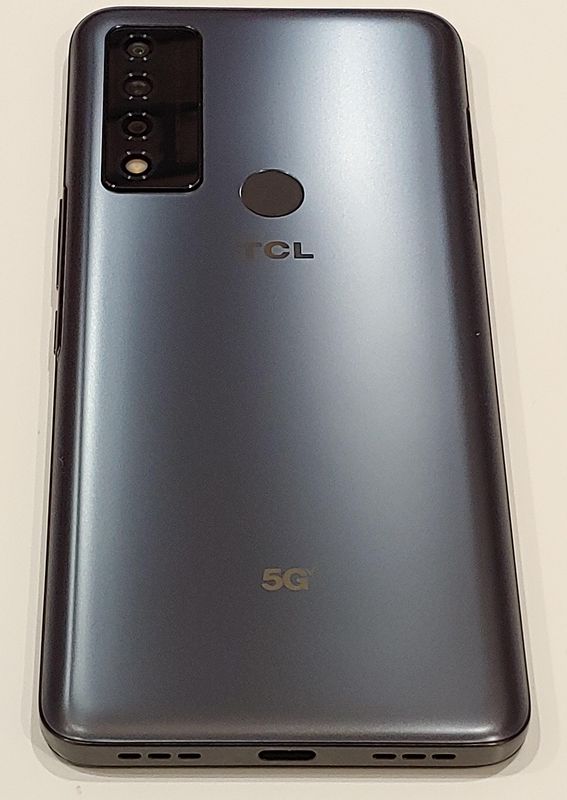 REVIEW – Cell phone manufacturers usually announce new models annually. Some new models push the boundary of technology and innovation while others make existing technologies more affordable. The TCL 30 V 5G smartphone falls into the latter category but has some compelling features. I have one to review. Read on to see what I think!

At CES 2022, TCL launched two new smartphones for the US market, the TCL 30V, and TCL 30XE. Both are 5G-capable, with the TCL 30V exclusive to the Verizon network and the 30XE exclusive to the T-Mobile network. To best capitalize on Verizon’s 5G network infrastructure, the 30V supports both Sub-6 and mmWave connections. For some context, mmWave 5G devices can achieve maximum speeds of around 4-5Gbps with a good connection, while the best sub-6GHz connections can achieve a few hundred Mbps, although tens of Mbps is often more realistic.

What to do with all that bandwidth? The TCL 30V has a large detailed 6.67-inch FHD+ (2,400 x 1,080) display with built-in image optimization to ensure that graphics and movies look as best as possible. The phone’s bandwidth can be used to upload pictures up to 50MP density and 30 fps full HD video from the back and 16 MP from the front. The pictures can be stored in the 128GB of internal storage or a microSD card slot with up to 1TB of extra space. The Android 11 OS and other bundled software take up about 32 GB of the installed memory.

When the phone’s 4500mAh battery runs low it can be recharged with an 18W charger into the USB port. While the phane lacks a wireless charge adapter and NFC, it does have an audio jack and large stereo speakers. 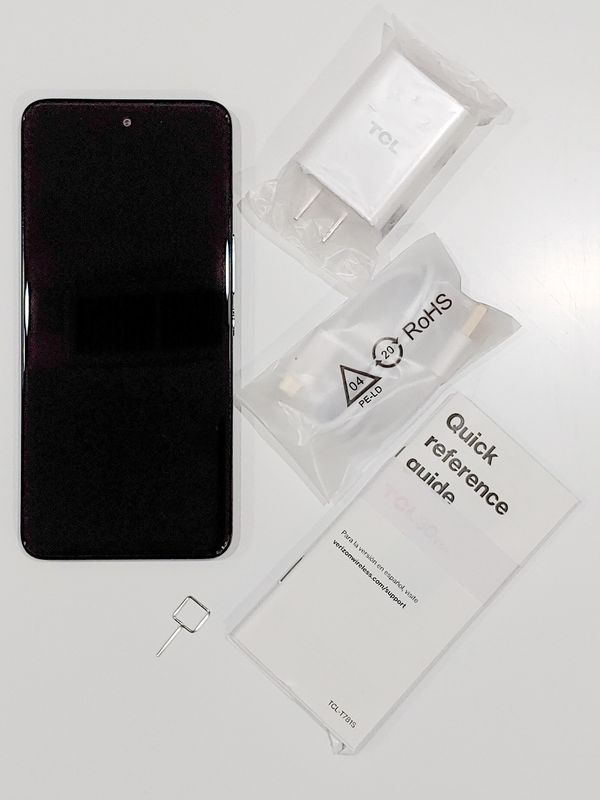 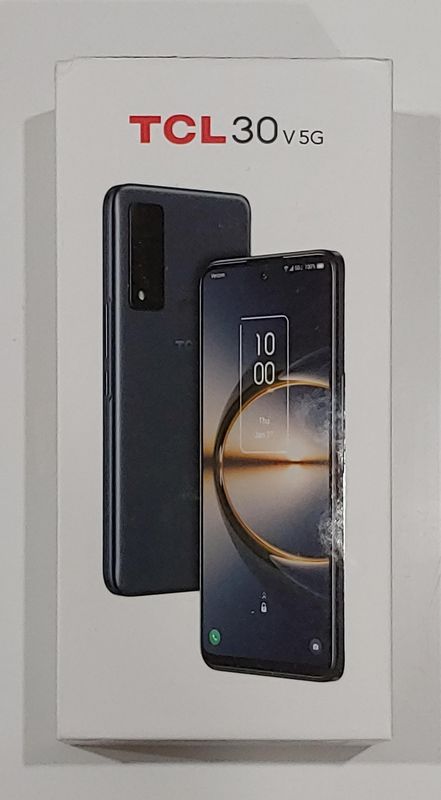 The TCL 30V 5G smartphone comes in a white gift box and has a photographic picture of the smartphone front and back, in glossy relief set against the matte white color of the box. The side of the box highlights some of the phone’s chief features including the screen size, the processor speed, the camera pixel count, the internal memory, the large battery, and the processor.

The rear of the box includes a description of the box contents, some disclosures about the product, and a claim that the phone is powered by NXT vision. 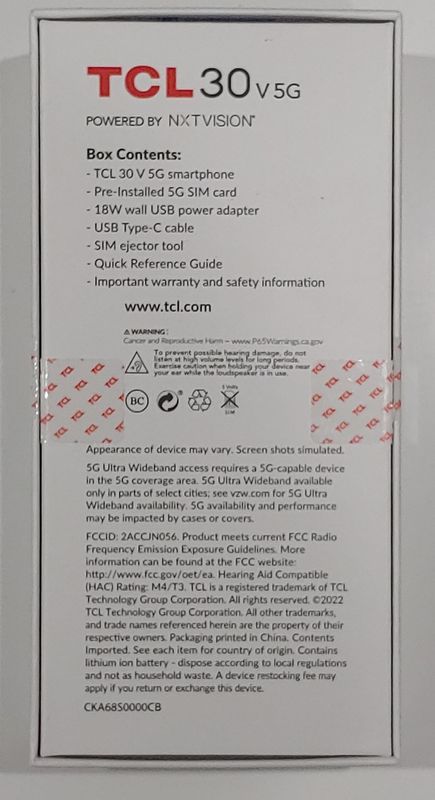 Inside the box, the phone is protected in a clear plastic case. The USB power adapter, type C cable, quick reference guide, warranty, and safety information are packaged below a cardboard mount for the phone. Within the mount is a SIM ejector tool held in place by two paper tabs. 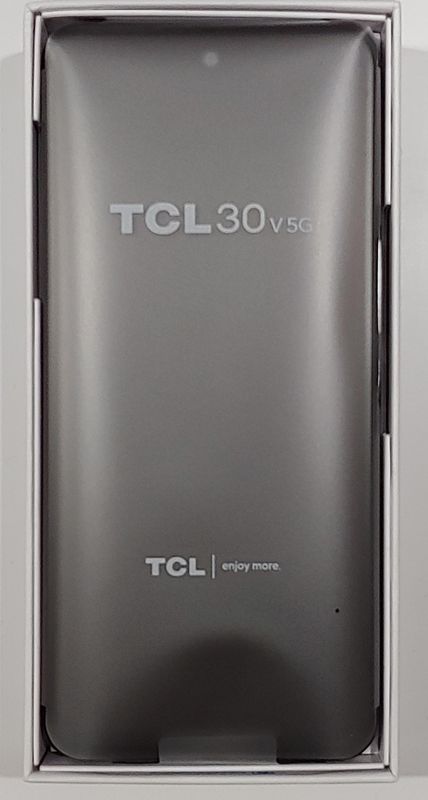 The setup and personalization of the TCL 30 V 5G smartphone are limited to the standard Google experience and it does not include additional licenses or disclosures from TCL. The preinstalled applications are mostly limited to the standard Google apps with the Verizon applications and some games thrown in too. The My Verizon app is required to manage the balance on the phone account but the other applications are not required to use the phone. Verizon apps can only be disabled but the other apps can be uninstalled.  From a user-accessible 100GB, there are about 1.4 GB of apps that should remain on the phone. There are another 2.4 GB of system info files. The memory available after consideration of the above is 96.2GB. If more memory is needed, the other task which may need to be completed is the installation of a micro SD card.  The TCL 30V 5G comes with a SIM tray that includes a dedicated micro SD slot. The phone can access up to 1TB of capacity in this manner.

The TCL 30V 5G weighs about an ounce less than the more prevalent Samsung Galaxy S22 Ultra. It is also slightly taller and slightly narrower than the Samsung model. It is not appropriate to make other comparisons between these phones when the Samsung model costs 300% more than the TCL model, however,  the greater commercial availability of the Samsung model provides a solid basis for understanding the physical dimensions and weight of this model.

The back of the phone is constructed of sturdy plastic with a matte finish that camouflages fingerprints well. The Gorilla Glass 3 front has an oleophobic coating which also diminishes the presence of fingerprints. 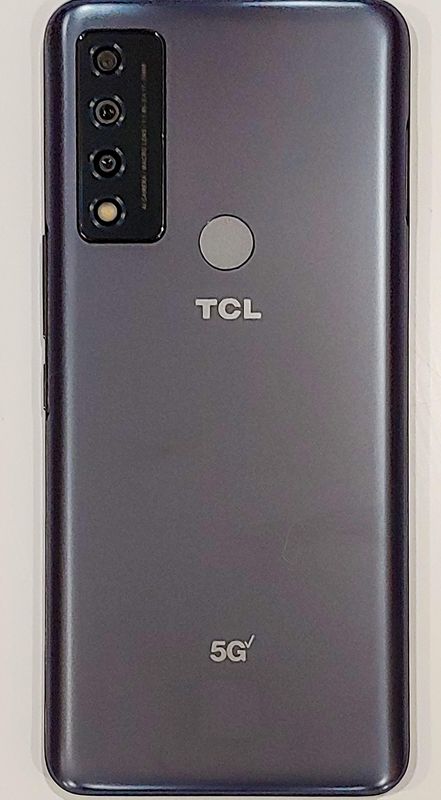 The power button and volume rocker are on the right side of the phone. The power button is about halfway down the right-hand side. It seems lower than it is compared to some other models and I found myself hitting the top of the volume rocker each time I wanted to turn the phone on. There are no buttons on the left-hand side. The top of the phone has a microphone on the right-hand side and a 3.5-millimeter audio jack port on the left top side.  Across the bottom of the phone are noticeably deep notches for the speakers and a type-c Port that is flush with the phone base. The left speaker port is either a microphone or perhaps also used for base enhancement.

The speaker drivers themselves are located at the top of the phone near the receiver and below the camera module at the bottom of the phone.

A barely noticeable slit across the top of the phone glass hides a speaker for the phone receiver. More obvious is the hole punch selfie camera which is positioned in the center top of the glass. 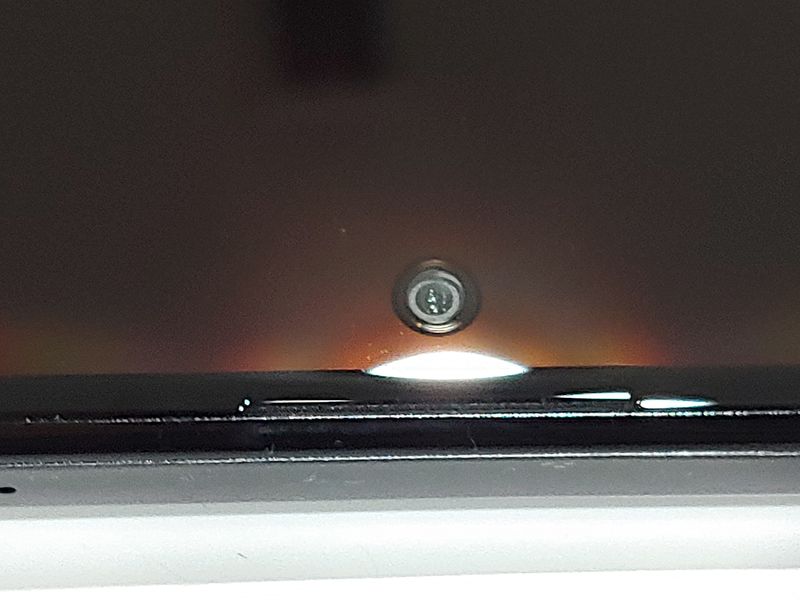 Powering the phone is an 8 nanometer Qualcomm Snapdragon 480 5G SoC. Based on the rankings at nanoreview.net which are in order of the Antutu and Geekbench scores, this processor lands at 68 out of 125. The Snapdragon 480 is at the top of the Series 4 performance ladder. The only processor by Qualcomm ranked above has a slightly higher maximum operating frequency.

The TCL UI includes a simple and elegant launcher that responds quickly and intuitively to swipes and other intentions. The UI includes 3 themes and 9 pre-installed wallpaper selections. The lock screen may be customized to display the TCL or classic Android variant.  Some of the icons included within the UI are animated, which makes for an entertaining experience.  The phone plays nicely with other launchers too, so if the TCL UI is not to your liking then another launcher may fit the bill.  The settings menu is mostly generic Android with the exception of NXT Vision. The before and afters on the NXT vision is demonstrated in the pictures below.

The following pictures are the same photo displayed with NXT vision off on the TCL 30V 5G, an LG G7, and an iPhone XR. Without the NXT vision activated, the picture looks darker and has less saturation than the rendering of the picture on the other phones. 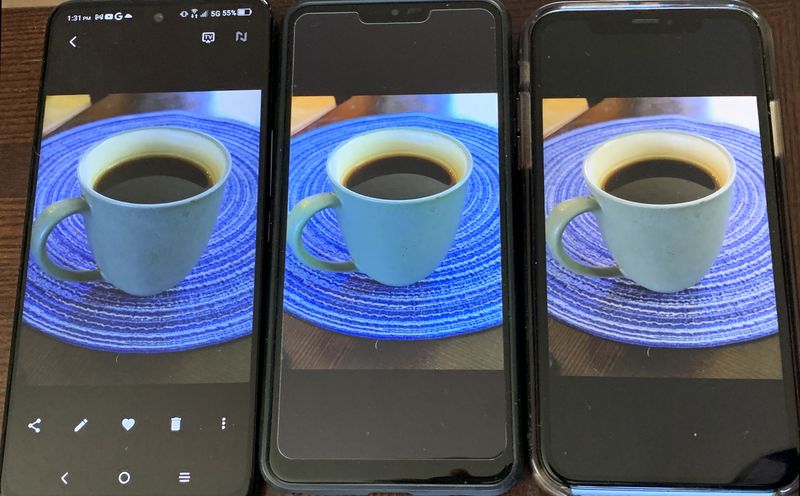 The NXT Vision has been turned on in the next comparison shot. It seems that the NXT vision does help to bring the picture viewed by the TCL into alignment with other phone displays. I have to wonder why it is an option to turn on and off. Is there a benefit to turning it off when there is a desire to save power perhaps? 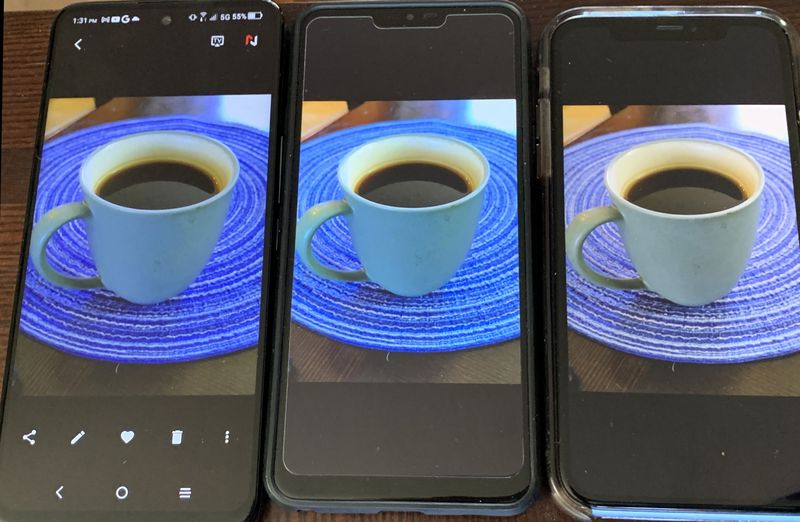 The 6.67 inches Full HD+ IPS LCD display is clear and crisp and it is possible to play demanding games like PUBG MOBILE and Shadowguns Legends in high detail at a high refresh rate without issue. The framerate does peak at 60 Hz even though the processor can handle more. There is no indication of what the touch sampling rate is but it did not seem to limit the gameplay (that was all due to my poor skills).

The 50MP sensor is capable of taking very detailed shots. Autofocus is by phase detection and works well in good lighting but becomes less reliable in dark conditions. There is no optical image stabilization. The 5MP ultrawide sensor produces photos that look soft and too dark. You can compare the main (top)  and wide (bottom) photos below. 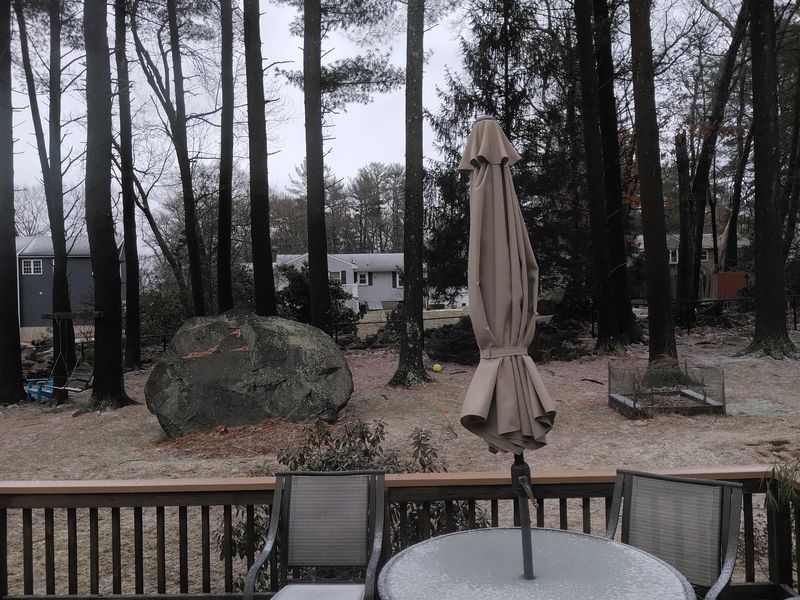 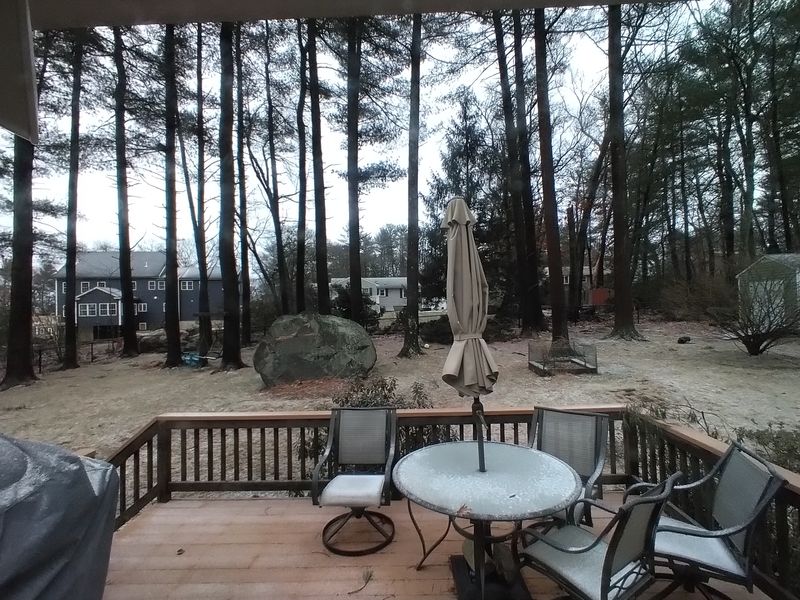 The 2MP macro camera produces worse pictures than a zoomed-in 50MP shot and does not really serve to do anything except fill in the hole that would otherwise appear in the camera array.  The 50MP camera takes in more info than the 2MP camera is capable of. Look at the 1:1 pixel rendering comparisons of the two pictures below.

The LED flash is a fixed color temp and produces (poor) results typical of phone flashes. 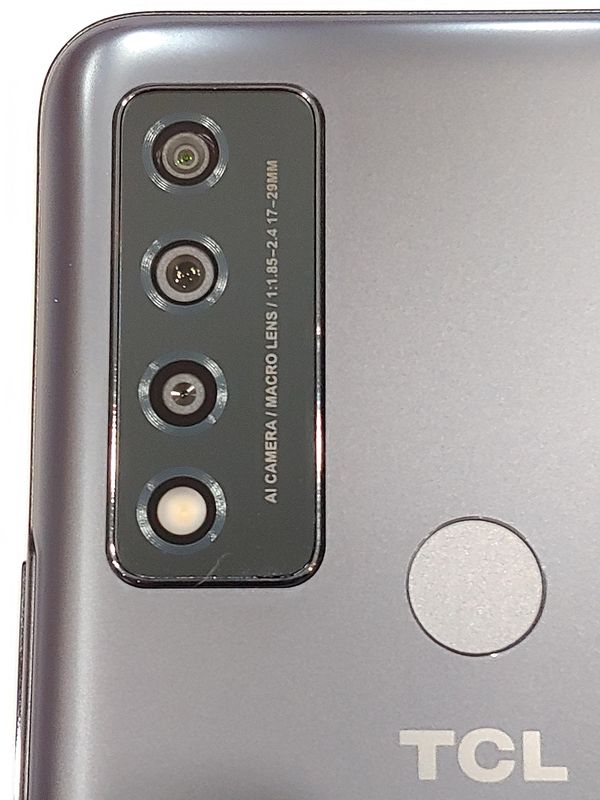 There are a couple of intelligent features which include AI scene detection, calorie detection (for pictures of plates?), and a smart guideline for portrait shots. I was not able to get the calorie detection to work but the other modes worked automatically. The portrait mode on the front and back cameras produced acceptable processing of the background image excluding the subject. There is also a color splash mode to keep the subject in color and B&W the rest of the scene. Since this is easy to do with a 3rd party app it is odd that the camera supports this mode. There are also low light modes such as capture movement, capture light, and draw light. A built-in stop motion mode is also included but also something that 3rd party apps often support. 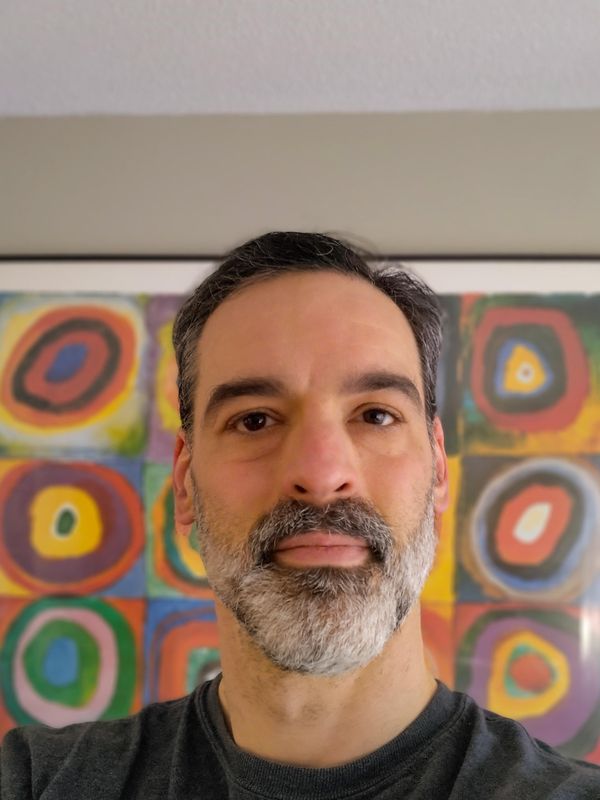 The 16MP front-facing camera is really good and can produce some really detailed selfies. You can shoot videos at a maximum of 1080p resolution at 30fps from both rear and front cameras. There’s also HDR and Panorama support for photography and video recording which can produce pretty decent results in proper daylight. 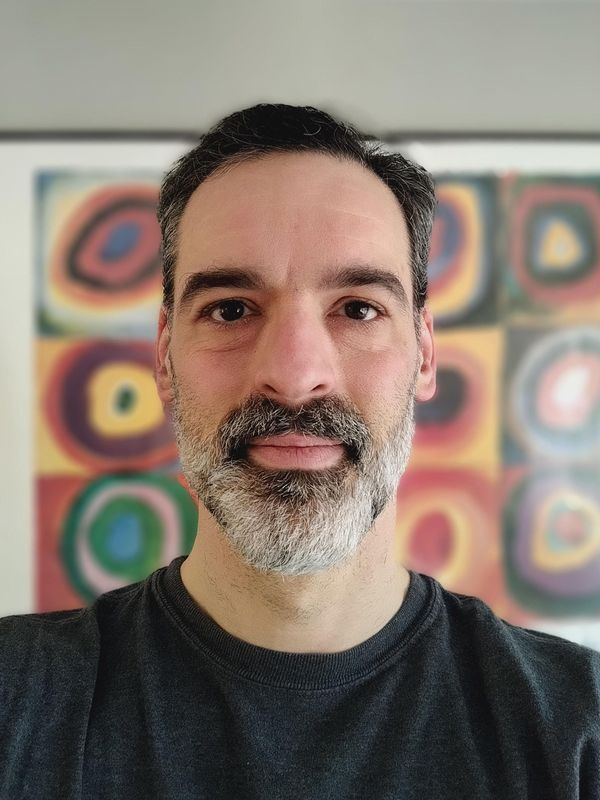 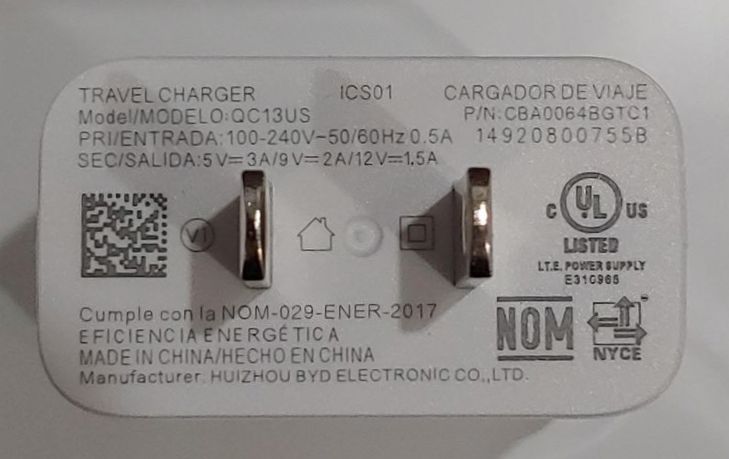 The TCL 30v 5G is a real value phone with some great features that used to only be available on higher-priced phones. There are a few items, such as NFC and wireless charging that you will have to do without, but if these things aren’t dealbreakers then the TCL 30v 5G is a valuable way to get 5G speeds and enjoy the internet on a fine phone.

Price: $199 to 299
Where to buy: Walmart and Verizon
Source: The sample of this product was provided by TCL.