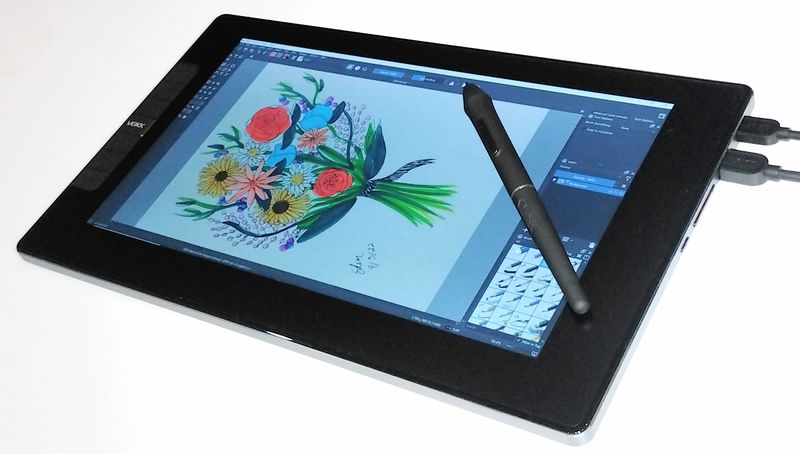 REVIEW – Tablets and iPads, along with touch-sensitive styli, have empowered many people to explore digital artistry on these devices. The VEIKK VK1200 is a 11.6-inch pen display for digital artists that supports pressure and tilt sensitivity that can interface with many OSs. I have one to review. Read on to see what I think!

The VEIKK Studio VK1200 pressure and tilt-sensitive graphics tablet is an external display that interfaces with a computer using an HDMI and USB cable. The HDMI interface allows the IPS screen to display 1920×1080 pixels at 16.7 million colors, covering 72% NTSC and 100% sRGB colors. The screen is laminated with an anti-reflective film that also improves the tactile response of the stylus.  The screen does not have a capacitive or resistive layer to sense touches on the screen. Instead, the screen communicates with a stylus wirelessly to determine the position, touch pressure, and tilt of the stylus. The panel communicates the stylus information to the computer using the USB interface. A custom driver for the tablet allows the programming of the two buttons on the stylus and six buttons on the display. The driver also allows programming of the click sensitivity.  The USB interface also powers the display. The VK1200 is not a standalone device and will not function without a computer. It is an external display with a pen input designed for digital artists and designers. 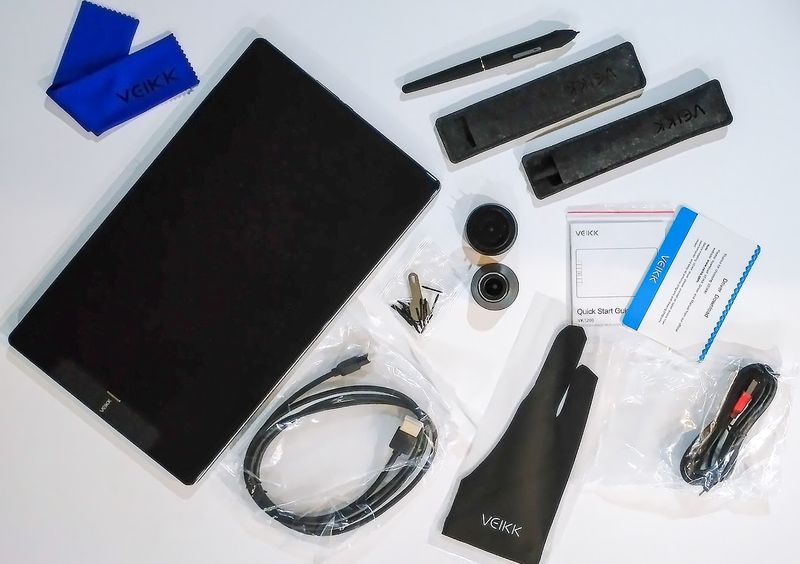 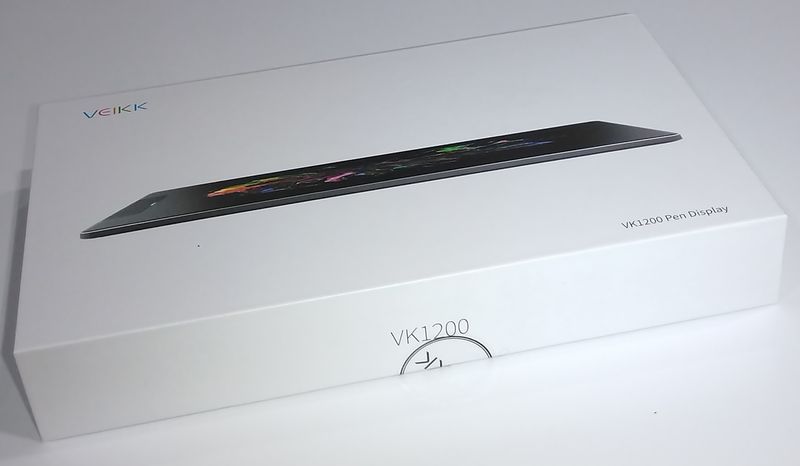 The VEIKK Studio VK1200 pen display comes in a white gift box with a profile picture of the VK1220 on the front. The back of the box lists some of the specifications of the equipment. On the inside, there is a plastic form that has spaces for the pens, pen holder, cables, and a space for the VK1200 on top. 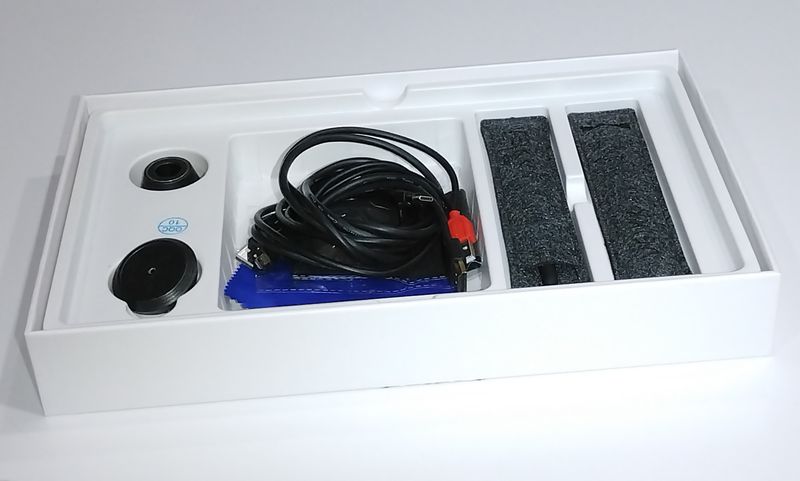 The inside of the box top has a sponge to keep the screen secure. The packaging makes a good storage case for the display if it is not going to be used all of the time.

The setup of the VEIKK Studio VK1200 pen display is very easy. This display requires that two cables be plugged in all of the time. One cable is a USB type-C and the other is a micro HDMI cable. The cables are of a universal design, however, the ports on the VK1200 are deep within recesses and may not be accessible to many generic cables of this type. 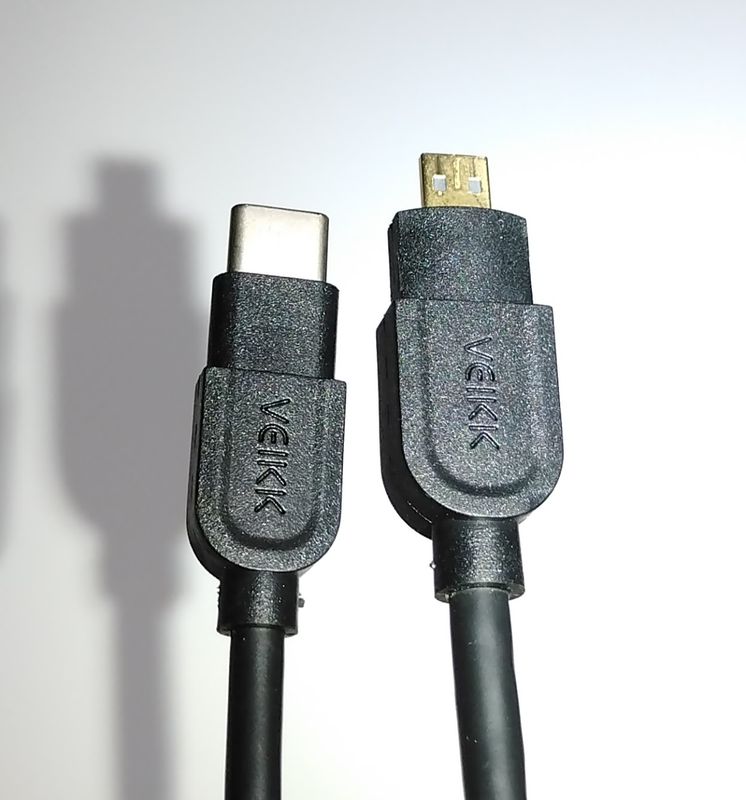 If you are using a system with only USB type-C ports a USB Type-C multiport adapter may work (as it did on one of my laptops) but also may not (as it did not work on a cellphone).  The USB cable has two USB type-A adapters on the opposite side. The black adapter carries power and data and the red adapter is for auxiliary power. 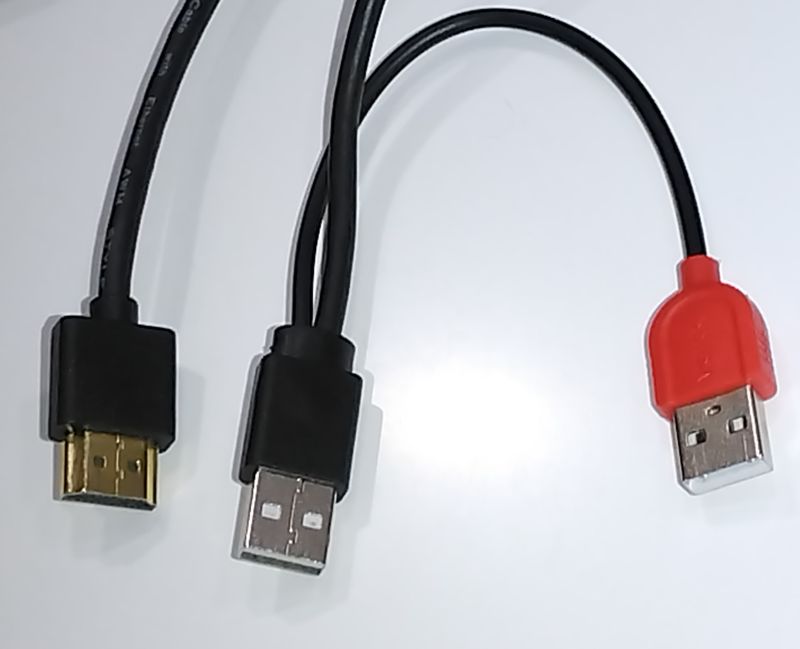 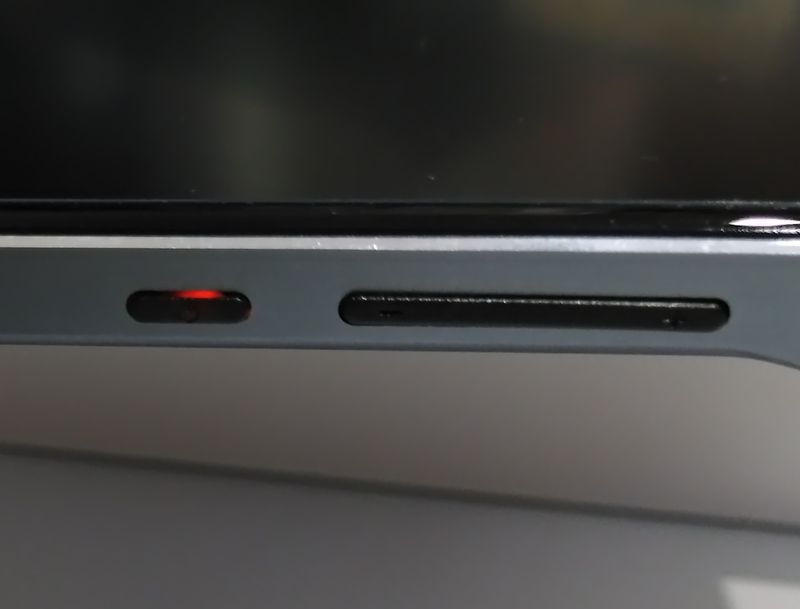 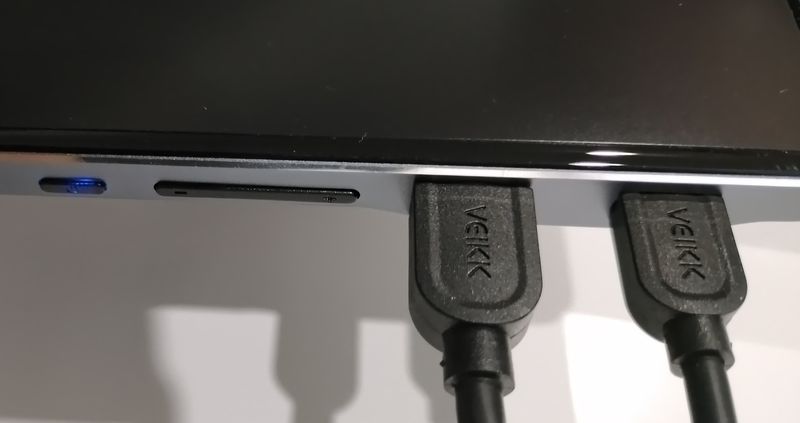 When actually working on the VEIKK Studio VK1200 pen display it will benefit the user to get some sort of stand. Fortunately, the rubber feet will help keep the pen display in place on a shallowly inclined drafting table. A laptop stand will work well to hold the display since the front edge is narrow but perpendicular to the display surface. Veikk does sell a stand, but any stand you have or prefer should work well.

The two pens have nibs installed and the display comes with 28 additional nibs. I haven’t seen the need for this many nibs for a long time but maybe the screen laminate will cause the nibs to dull more frequently. The nibs are removed by grabbing the plastic with the steel extractor or concentric steel color on the base and pulling. The nibs are held in place by friction.

The pens are powered by an electromagnetic field inside the display so no battery replacement or charging is needed. Also, there are no pairing steps required as the pens only work within 10 mm of the screen.

Without installing the driver the display will be powered and the pen can be used for “pen computing” on whatever system the display is plugged into. The Veikk driver is required to recognize and customize the pen buttons, recognize and customize the display buttons, and adjust the screen color, brightness, and contrast. The driver is available for Windows 11/10/8/7, Mac OS 10.12 (or later), Chrome OS 88 (or later), Linux(Ubuntu/elementary OS/Pop!OS/ezgo/debian/mint/mageia/centOS/Arch), and Android 6.0 (or later). 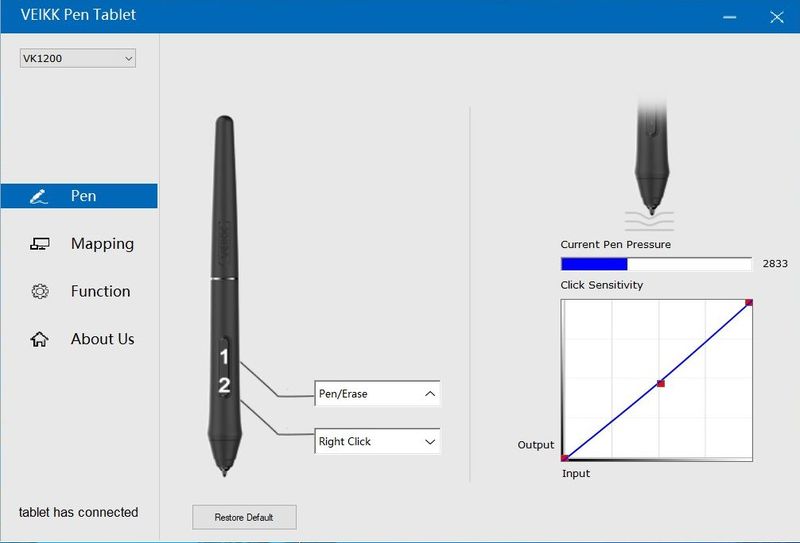 When assigning the buttons on the screen or the pen one may choose the following options:

The Pen/Erase option toggles between pen and eraser in most drawing apps. The Monitor Switch option brings the mouse cursor from one screen to another screen in dual monitor mode 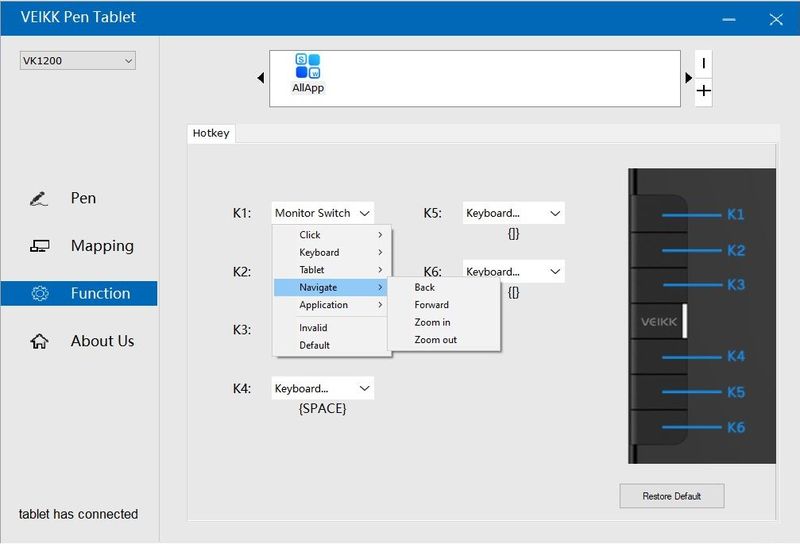 Note that there is no on-screen display for adjustment of screen parameters but there is a hardware rocker switch for adjusting brightness to suit the ambient conditions.

The hotkey setup can be set to a specific application using the driver software. Additionally, the setup can be imported and exported using a .XML file to allow the setup to be backed up (for trying new things) or shared between computers.

The design of the VEIKK Studio VK1200 pen display looks solid. The front of the display is covered in a matte film that precisely fits the radius of the screen and around the buttons.

The power, brightness, and six custom, buttons have a good tactile response and feel solid. The back and sides of the display are made from a single surface of aluminum. The back of the display has structural surfaces pressed into the back to maintain rigidity. 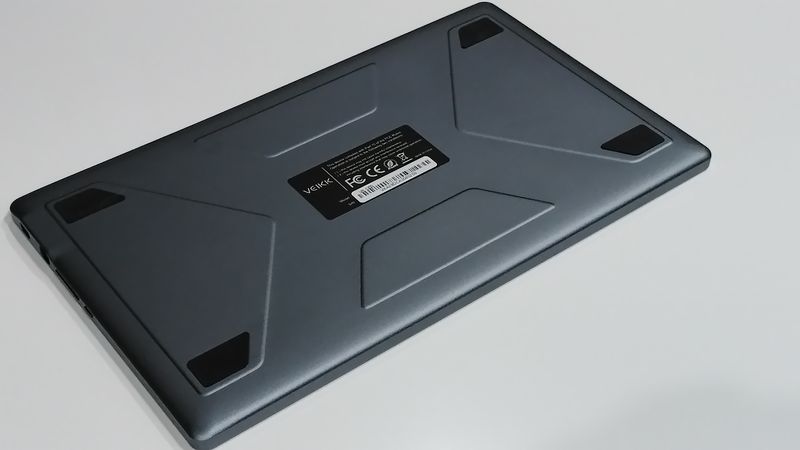 The top of the aluminum bezel that surrounds the screen has a polished chamfer which contrasts nicely with the grey anodized surface of the rest of the display. 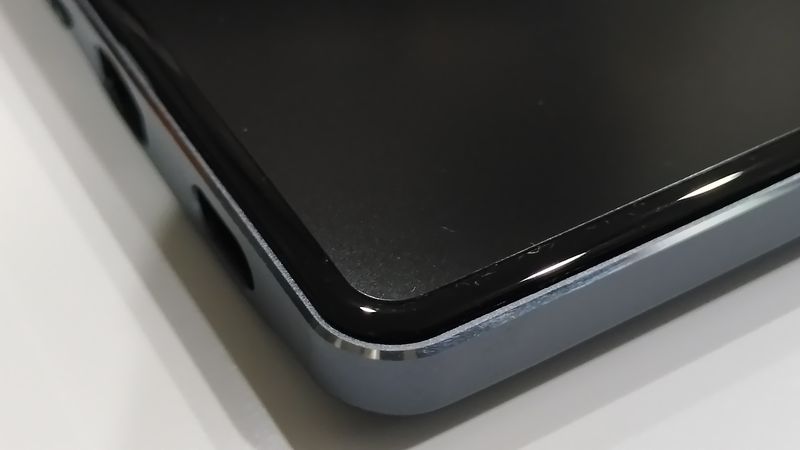 Rubber feet on the bottom help secure the display to whatever surface it is being used on. 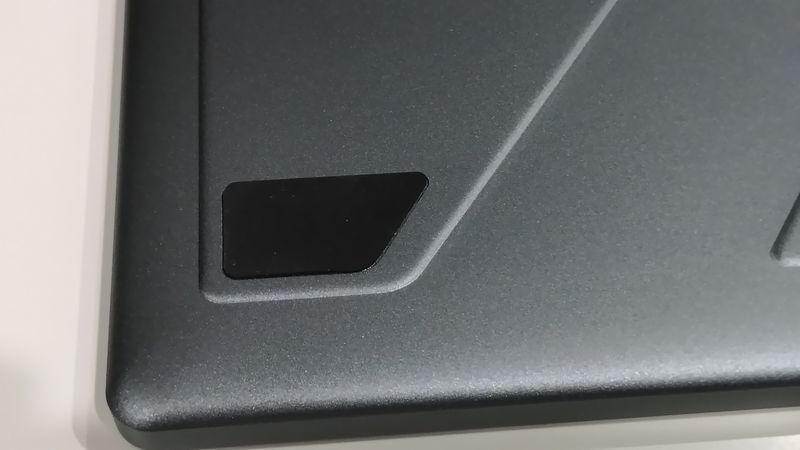 The P05 pen has a rubber surface that helps prevent slipping. The pen is nicely balanced and feels comfortable in the hand. The two buttons on the pen, beneath a common rocker-like switch, are easy to actuate while holding the pen in a drawing position.

The pen comes with a pen holder that has 8 pen tips in the base. 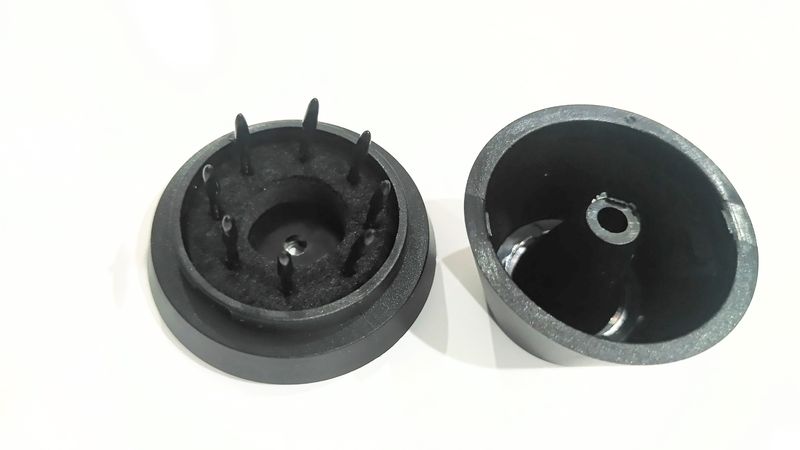 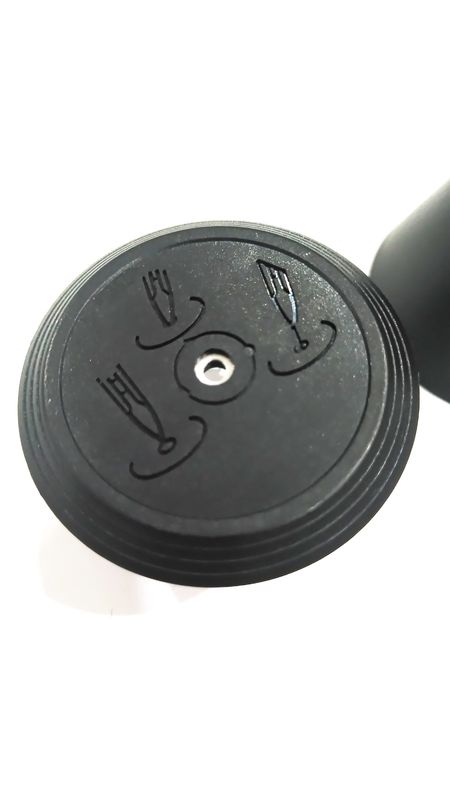 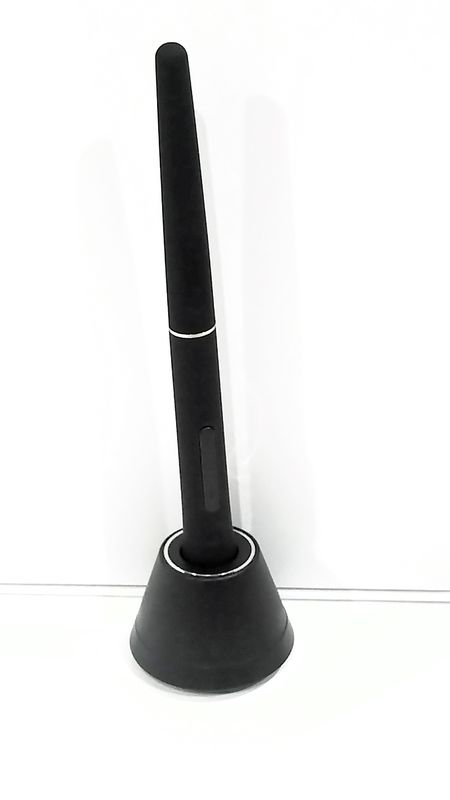 The matte surface film provides a comfortable surface to draw on and is a great surrogate of a high-quality plate finish drawing paper. The display is laminated very close to the film surface. While there is some parallax between the pen tip and the display image it is very small. The 178º viewing angle on this screen allows inspection of the image from various angles. The film eliminates harsh reflections, but bright light will still be reflected by the film as a white sheen. Overall, the screen looks fantastic.

There is no stated brightness or contrast ratio for the display. I would say that the brightness is great for normal indoor use, but I don’t think it is bright enough for work outside. The contrast is very good with the standard setting.

One nice feature about the driver is that the display can be rotated 90, 180, or 270 degrees so that the mirrored display will fit the pen display most appropriately and the 6 buttons can be moved from the left to the right. After calibrating the display with a five-point calibration, the pen may be used to precisely and repeatedly direct the cursor to each corner of the screen.

The performance of the VEIKK Studio VK1200 pen display was evaluated using Krita. The pen display accurately communicated the pressure and tilt applied to the pen to the program and drawing. The strokes were smooth when drawing quick curves or crosshatching quick straight lines.  The pen is capable of detecting very fine, low-pressure strokes but also doesn’t stall or get stuck when making very heavy and deliberate strokes.

The VEIKK Studio VK1200 pen display is a great option for a portable pen display. It is a bit small to work on larger brush strokes with fine detail but a larger display may be too big for portability. The Veikk VK1200 is also affordable and is a good option for those who are first exploring digital graphic design and illustration. The comfortable and responsive pen, coupled with the bright, clear screen and customizable buttons are the best features of this pen display.

Price: $164.99
Where to buy:  Veikk and Amazon
Source: The sample of this product was provided by Veikk.