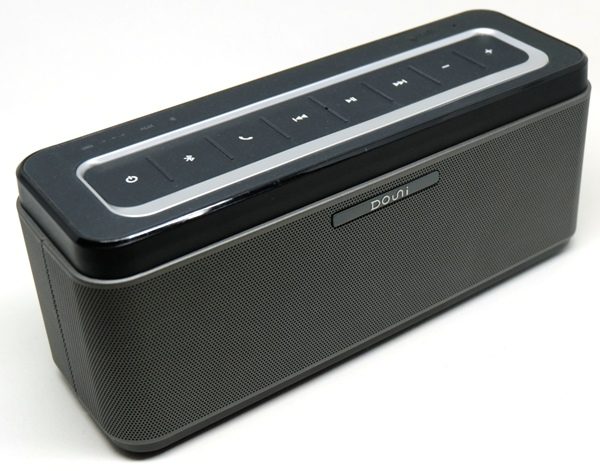 After reviewing a handful of portable Bluetooth speakers, I’ve found that some really appeal to me like the UE Megaboom because of its great sound quality (it has some bass!) and long battery life among other things, but others like the Logitech x300 do not. The Logitech x300 tends to dampen mid and upper frequencies when bass frequencies are playing. When the Gadgeteer was offered the Douni A5 Bluetooth speaker, I volunteered to review it to see how it compares to other portable speakers I’ve tried. After testing it, I’d say it competes rather well in the audio quality department, but not so much in the Bluetooth range department. 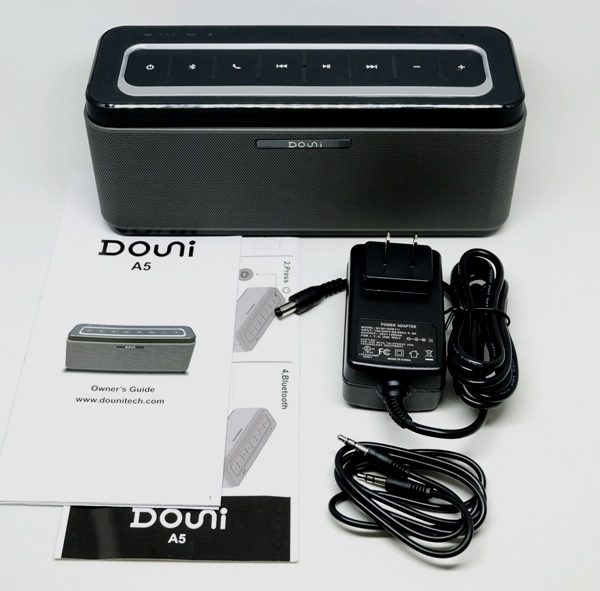 The Douni A5 Bluetooth speaker feels like a durable speaker. It is a rectangular speaker that is black on the top and bottom and has a gray metal grill.

The back of the speaker contains the ports.

The ports are (from left to right): Aux Audio In (to physically connect a mobile device to the speaker), Aux Audio Out, 15V DC In (to charge the speaker), 5V Out (to charge your devices), and a Reset button (resets the speaker to its factory default settings).

The bottom of the speaker is also covered in rubbery material to prevent the speaker from moving around while on furniture.

Auto shut-off: After about 40 minutes of inactivity, the speaker is supposed to automatically shut off according to the Douni A5 product description on the Amazon. However, I was not able to replicate that – the speaker remained on until I turned it off.

Bluetooth Pairing: After powering the speaker on for the first time, it immediately went into pairing mode in which the Bluetooth symbol on the speaker flashed alternately blue and red. At this time, I needed to go into my device’s Bluetooth settings (first I made sure Bluetooth was turned on) and look for the newly discovered device listed as A5. After tapping on the A5, my speaker was connected and a voice prompt on the speaker said, “Connected”. It is possible to pair up to eight devices to the speaker (which means that the speaker will remember that it has been paired to eight of your devices). When the speaker is powered up the next time, it will connect to the device it was connected to last. To change to one of the other seven paired devices, you can press the Bluetooth button on the speaker for one full second to disconnect the speaker from the current device (a voice prompt will say, “Disconnected”) which will then put the speaker into pairing mode (the voice prompt then says, “Pairing”), after which you can go into your other mobile device’s Bluetooth settings to tap on the A5 in the list of paired devices to connect it to the speaker. Even though the speaker remembers up to eight devices that it has been paired with, this speaker apparently cannot be connected to more than one device at a time, unlike the UE Megaboom which can be connected to two devices at the same time and thus can play music from both devices without having to stop and disconnect from one device to connect to another. 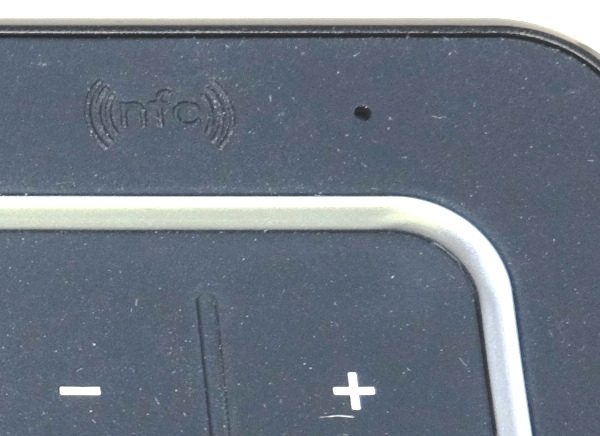 This speaker is also NFC capable which means that you can pair it with an NFC equipped device. When NFC is turned on on your mobile device, you’ll only need to pass it over the NFC area on the speaker which is located just above the Volume Down/Up controls as shown in the photo above (Note: you may have to search for the NFC area on your phone). Pairing the speaker to my Nexus 6 phone was very easy using NFC. When passing the lower right quadrant of my phone (where the NFC hardware location is) over the NFC area of the speaker, my phone displayed this message, “Are you sure you want to pair the Bluetooth device A5? Yes or No”. After tapping on “Yes”, I was paired. When paired and connected, the speaker and device volume controls are in sync.

In the photo above, you’ll also notice the microphone next to the NFC area on the speaker that picks up your voice when using the calling features of the speaker.

The above photo also illustrates how the rubber top really attracts dust and lint. This is difficult to keep clean and this was as clean as I could get it! 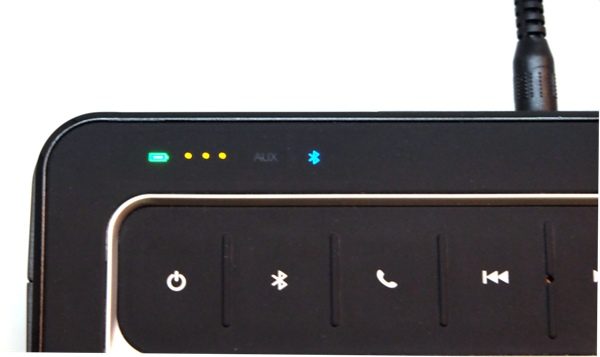 LEDs (from left to right): There is an LED battery symbol, three LED dots, an “AUX” LED (not lit up in the above photo), a Bluetooth LED, and control panel backlights.

The three red LED dots indicate the level of battery charge: one dot = 30%, two dots = 60%, and three dots = 100%. When the battery is low on charge the Battery LED symbol will flash red (you will also hear a series of tones indicating low battery charge); otherwise, it will shine green.

When you physically connect your device to the speaker using an audio cable, the “AUX” LED shines green.

As stated earlier, the control panel uses backlighting to illuminate the buttons for a few seconds when the speaker is moved or if it thermally senses your hand near the control panel. Thermal sensors – that’s pretty cool. You don’t have to turn the lights on to control the speaker.

Bluetooth Connectivity and Range: After pairing and connecting the speaker to my devices (Nexus 6 phone and iPod Touch 6G), just after turning it on, periodically I found that the connection would drop for a fraction of a second several times (within about a 15 second timeframe) and my device was only about one to two feet away from the speaker. This happened enough times to make this distracting and frustrating. I also noticed that with only one wall separating my device from the speaker, I frequently lost connectivity. When testing the line-of-sight distance from my Nexus 6 phone, I was only able to go 10 feet away from the speaker when the connection started to drop. When doing the same test with my iPod Touch 6G, I was only able to go 20 feet before the connection started to drop. Oy! This is exceedingly disappointing especially when the Bluetooth range is supposed to go up to 66 feet according to the A5 product description on Amazon.

Charging Time: The User Manual states that the recommended charging time is four hours. When charging it with the provided power cord, the LED dots would flash in sequence until a certain level of charge was attained (upon reaching 30% charge, the first LED dot remained on, and when reaching 60% charge the second LED dot also remained on, then when reaching 100% charge, the third dot also remained on). Even though the manual says the speaker should charge for four hours, I noticed that it took only about 1.5 hours to fully charge the speaker. When I charged beyond the 1.5 hours, there were no differences in the status lights.

Using the A5 as a Charger: If you should need to charge your mobile device in a pinch, you can do so using this speaker. However, it only provides 5V/1A so the charging will be slow.

Controls: I noticed that when using any of the control panel buttons, I needed to press each for one full second (except for the Power button which needed two full seconds when turning the speaker on). A simple split-second tap was insufficient to get the buttons to work properly. Once I learned the proper way to operate the controls, all of them worked well. I could play/pause, skip forward/back a track, or increase/decrease the volume levels. Holding the volume buttons down would increase or decrease the levels more quickly.

Calling Features: When you are connected to the speaker via Bluetooth and you receive a phone call, you must press the Call button for a full second to answer the call and press again for one full second to hang up. Call clarity on both sides was adequate. When I answered the call on the speaker and spoke within about eight inches from the microphone on the speaker, there were no issues. If I was a foot away or more, the caller indicated that my voice started to echo and was less clear.

Aux audio-in: When you connect your device using a 3.5 mm audio cable, this device supersedes Bluetooth devices. I also noticed that the volume on the speaker and device are not in sync when connected this way, thus, you’ll need to find your preferred volume level by adjusting it on both devices.

Frequency Range: Using my Audio Test Tone Generator Android app, I was able to comfortably hear 50-17,000 Hz frequencies (well, my kids heard them) when the speaker was set at moderate volume.

Audio Quality: This speaker can truly fill a room with music – it’s loud – at least it is to me. This speaker’s audio quality was quite impressive. It sounds just about the same as our UE Megaboom and it didn’t dampen the upper/mid frequencies like the Logitech x300 when playing bass-heavy music like Silent Shout by The Knife. Other music genres like classic rock (the Famous Final Scene by Bob Seger & The Silver Bullet Band), Celtic/new age (The Highwayman by Loreena McKennitt), and classical music (Clair de Lune) sounded crisp and clear. The vocals and the guitar on The Highwayman were beautiful to listen to. It is my perception that the speaker tends to slightly favor the mid to upper frequencies but I am not an audiophile so take that with a grain of salt – or several grains of salt.

The Douni A5 Bluetooth speaker is quite wonderful to listen to until you get more than 10 feet away from it at which t_me th_ ___nection _tarts to _rop (“…time the connection starts to drop”). Yep. My studies have shown conclusively that this speaker suffers from separation anxiety. In addition, the controls need to be pressed one full second to work properly. The call features work well and the speaker does charge quickly (1.5 hours) but a full charge will only give you about nine hours of playback time when the speaker is set at a moderate volume level (as opposed to the 12 hours that the User Manual states). Even though the speaker sounds great, the Bluetooth range problems drive me crazy, thus I would personally pass on this speaker.

Since I reviewed this speaker, I contacted Douni support about the Bluetooth issues that I was having and they replaced my speaker (after several back-and-forth troubleshooting emails). The replacement worked MUCH better than it’s predecessor – the Bluetooth range was greatly improved. I feel like I can now recommend this speaker because it sounds great, works well, and is relatively inexpensive.

Source: The sample used in this review was provided by Douni. Please visit their website for more information or Amazon to purchase one.

Kathleen has always enjoyed technology and the sciences (biology and entomology). She has worked as an entomological research technician and an end user services tech before becoming a stay-at-home mom and home educator. Her continued interest in technology led her to join the Gadgeteer team in 2014.