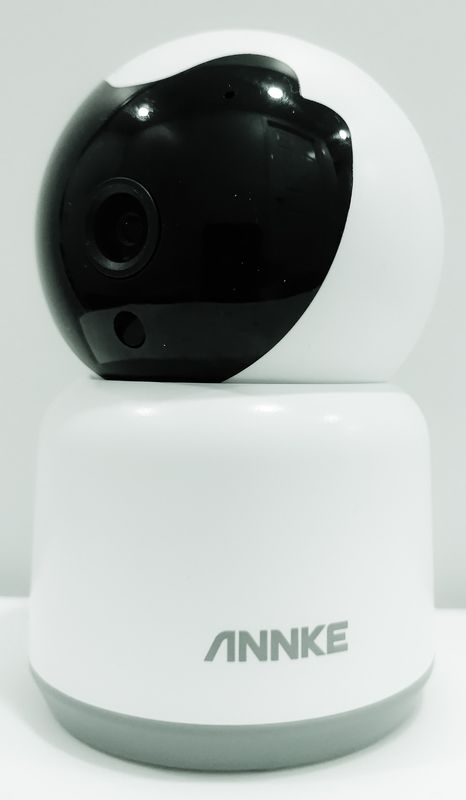 REVIEW – Home security cameras have become less costly making it more affordable to record activities and keep an eye on things. The Annke Crater 1080p WiFi pan tilt security camera is inexpensive and includes recording, AI tracking, notifications, PTZ support, and night vision. I have one to review. Read on to see what I think!

The Annke Crater 1080p WiFi pan tilt security camera is a pedestal-mounted indoor security camera. The camera can rotate around 350° and up 70° from the horizontal.  The video capture is 1080P and is stored using the H.264+ protocol. When the camera is powered it can record video, switch between daylight and active IR video recording, and pan to track motion. When the camera is connected to the app (through the internet) the app can be used to pan and tilt the camera and pinch-zoom the image. The app can also be used to review recorded videos and the video feed can be viewed from the Annke Smart app on an iPhone or Android device. The app allows two-way communication with the camera’s microphone and speaker and can play the sound of a siren if so desired. When the app is running in the background. The feed to the could is encrypted for security. The app can control the camera and works with an Alexa skill. 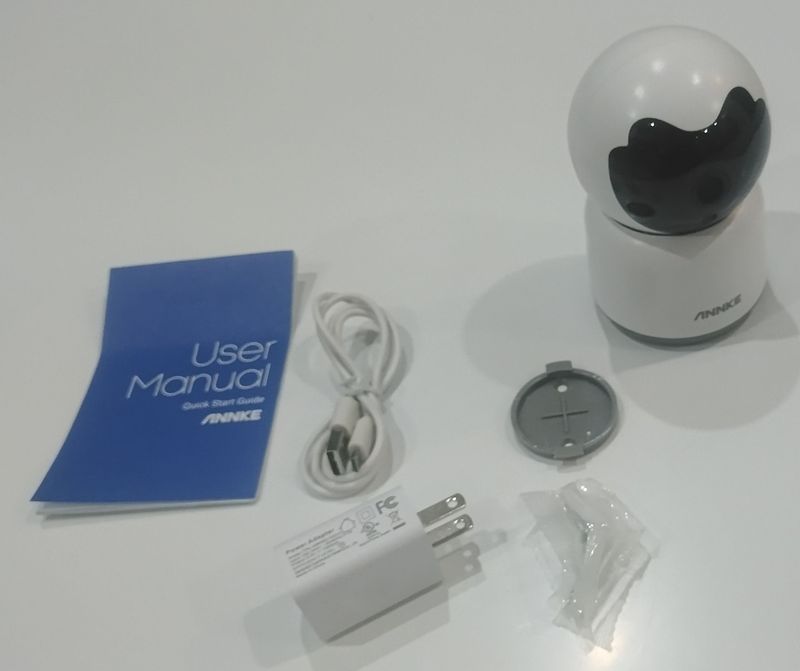 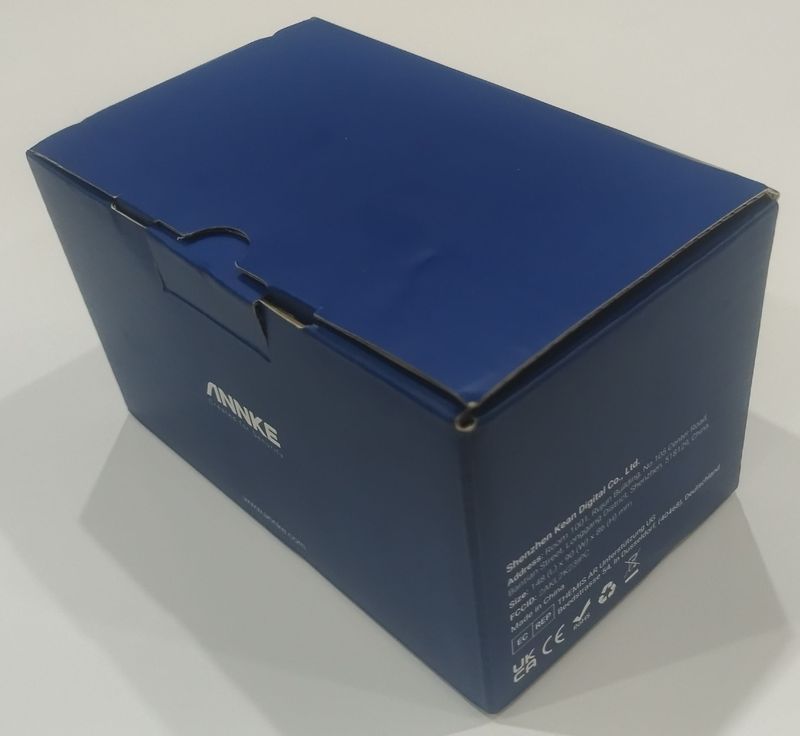 The Annke Crater 1080p WiFi pan tilt security camera comes in a blue colored box with Annke printed on the front and information on the side. 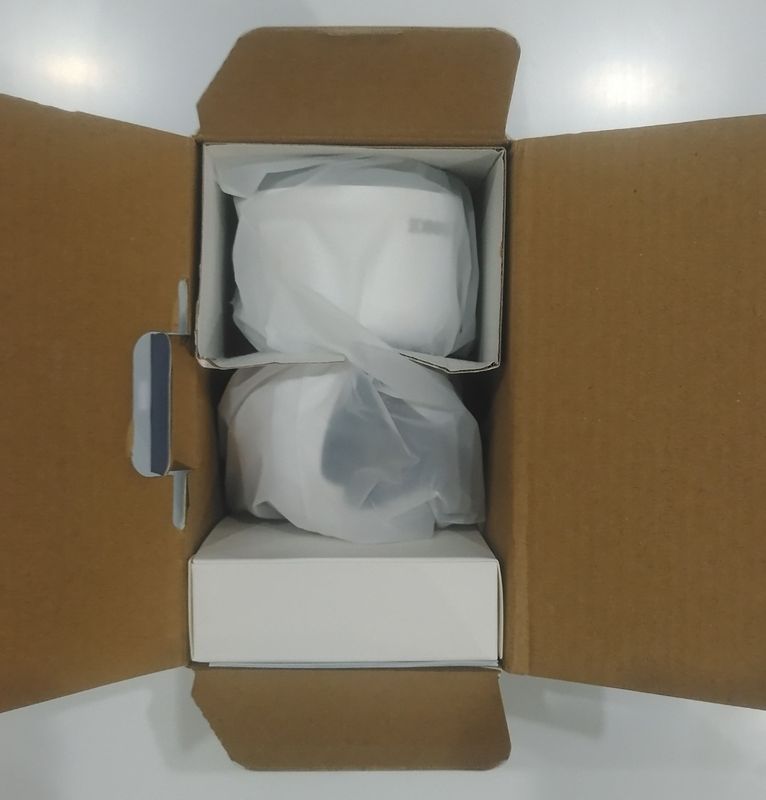 The design of the camera is very similar to a design sold by TP-Link.

The Annke Crater 1080p WiFi pan tilt security camera is mounted in a plastic shell. The base of the camera has a grey color and has three rubber feet on it for resting on a surface. The base also has a bayonet mount to a plastic piece included with the camera for mounting to a flat surface or to a flat ceiling. The tracking programming only pans the camera so mounting to a wall or a slanted surface is not supported unless the camera sits under an L bracket or on a small shelf.

The Annke Crater camera has a power port in the rear for a micro USB plug. Installing this on the ceiling may look better if the power is fed from underneath. I looked into the base and there seems to be room to either feed the microUSB into the base or to extend the connector out the rear with a JST connector. This is definitely a maker project so I’ll leave the details for those who actually take it on. 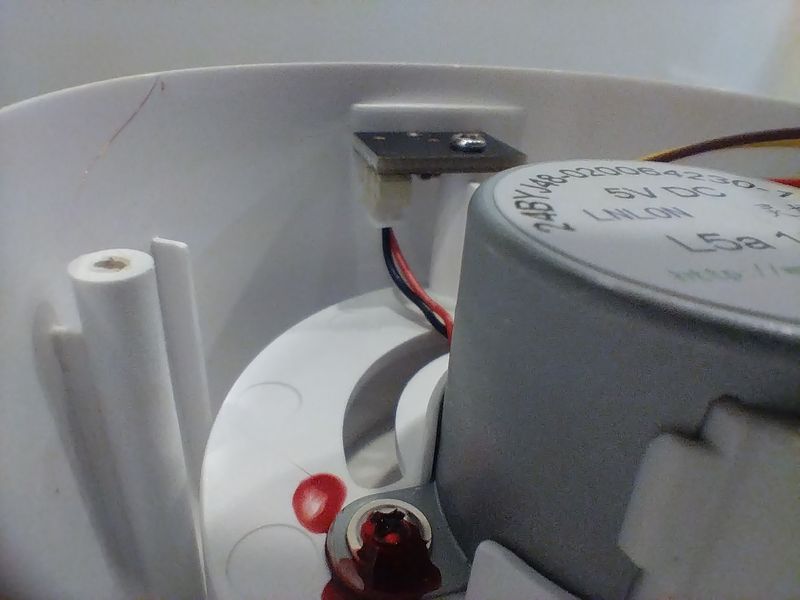 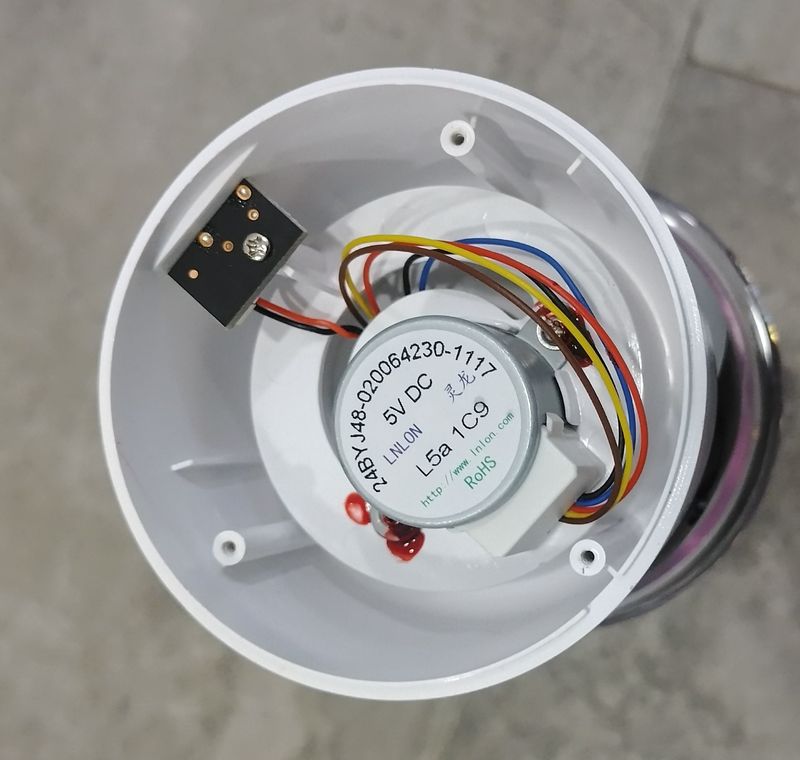 The camera section is white plastic except for the camera area, which has a dark plastic that conceals the 6 IR LEDs for active IR camera operation. 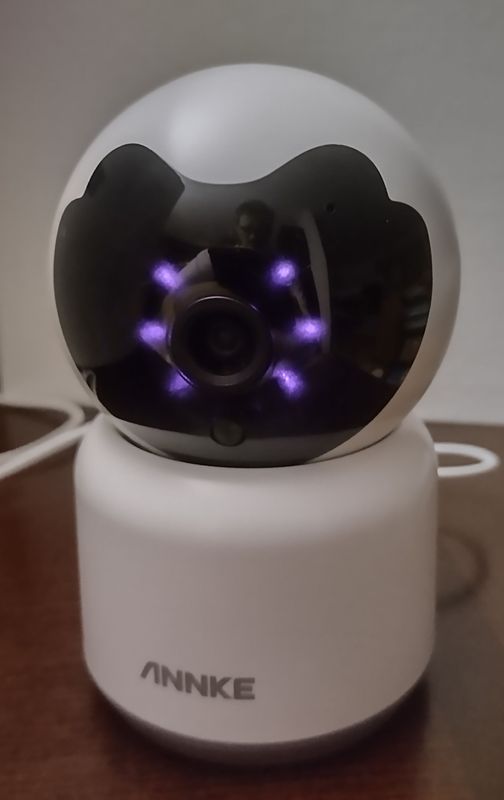 When the Annke Crater camera is powered on the Active IR LEDS can be seen glowing inside the face. The camera does a power-on self-test – triggering the IR shutter, moving the tilt to its lowest setting, moving the pan as far left as possible, and announcing, “Welcome!”

The first thing that must be done is to connect this to the Annke app, which is available on Android and iPhone devices.

The process of registering the Annke Crater 1080p WiFi pan tilt security camera in the app involves accepting the terms, (creating an account) and logging in, selecting the smart camera from the list of available devices, resetting the device, adding the password to the WiFi network that the mobile is connected to and that will be the network that the camera is on, and displaying a QR code to the camera for it to log into the same WiFi network. Note that the QR code contains the unencrypted SSID and password for the WiFi network and this is the reason I have made it unreadable here. After the device is added it can be assigned to a room in the home where the account is based on. The whole process should take less than 10 minutes.

The main video screen may be viewed in portrait or landscape. In landscape mode, there is a control for moving the camera on the left and taking a video, using communication, and taking a screenshot on the right. In portrait mode, the display shows the bandwidth used by the feed.

The operation screen for the Annke Crater 1080p WiFi pan tilt security camera has a menu bar across the bottom. The messages are the alerts and notifications that the app. For activities, a screenshot of the triggering action will be displayed here.

The next section is for pan, tilt, and zoom operations. This is really just a pan and tilt control since the zoom is controlled by pinching and stretching the image on the display.

The next section identifies specific items that can be put into the frame by moving the camera to a specified pan and tilt. The camera doesn’t match the image just the pan and tilt location. So, if the camera is moved the saved location will be offset.

The next section is for cloud storage. I didn’t purchase any of these but for a fee, the manufacturer will back up the contents of the camera. The advantage of this service is that if the MicroSD is damaged or lost then there is an online backup of the video feed. Also, the onboard memory may only last 100 hours before the device is full but the online storage has a much higher capacity.

The features tab shows where most of the capabilities are stored. The playback feature allows review of the onboard storage.

The videos can be exported by making a screen capture of the video, but not by bulk export. I tried opening the *.epv file with an H.264 demuxer but it didn’t work.  The display can also be viewed in landscape. There is also no way to adjust to a specific time so the noon-time video takes a lot of scrolling. Also, the video preview is not scrubbed as the time is scrolled through, so you sort of need to know where you are going.

The gallery is the local app-based store of video and pictures. Theme color allows adjustment of light mode or dark mode. Private mode is a way to turn the camera off so that it is not recording. Night mode removes an IR filter and turns on 6 IR LEDs so that the camera can monitor activities in complete darkness. The anti-flicker feature adjusts the refresh of the video to not coincide with the frequency of electronic devices. This can be set to 50 or 60 Hz.

The app also has a preferences screen for specific settings for the camera.

The Annke app is not as good as the Smartlife app. The apps are virtually identical in look and design but the latter has Google Home integration as well as Amazon Echo. It takes less memory on the device and Smartlife is able to identify the location of the property, so sunrise and sunset routines can be used.  The app also allows integrations with other automation. For instance, the tracking function of the camera can be started when the lights on an app-connected switch go off.

The Annke Crater 1080p WiFi pan tilt security camera records a decent-quality picture in a variety of lighting conditions. The captured video above shows the picture in a fluorescent-lit hallway, then with the lights off to a dim twilight, then with night visions, and then a tilt to the full direction and a pan to the left and to the right.

The eye chart on the back wall shows that the camera can pick up about 20/60 vision. this is average for 2K resolution under high compression. Even in full HD, the zoom feature is not as nice as many advertisements for surveillance cameras or from what NCIS has ingrained in our collective opinion of what is possible with digital zoom. With this level of compression, it may not be possible to see currency denominations clearly from 10 ft away. The camera may perform better as a way to monitor the coming and going of people and activities in a room.

A surveillance camera is one of those items that you only ever wish you had after it is too late. The Annke Crater 1080p WiFi pan tilt security camera is a relatively inexpensive unit with a bunch of highly useful features and the ability to work with other IoT items in the Smart Life ecosystem or even the IFTTT ecosystem.  The most important part of any camera is that it takes good pictures and the images from the Annke Crater are pretty good. I recommend you get one – and hope you never need it.