REVIEW – Wood-fired pizza is all the rage, but most pizza ovens are VERY expensive!  I’ve long wanted an outdoor wood-fired oven for homemade bread and of course, pizza.  I had visions of building one of the big bee-hive-shaped ovens made of brick and clay on our patio, but that has obviously never materialized.  When the opportunity to review the Vevor Outdoor Pizza Oven came, I thought this might be my solution and I was excited. Once put together (no small task), it can make good pizza.  But it comes at a cost.

It’s an outdoor pizza oven.  I guess they have to stipulate the “outdoor” part since, like a grill, you have to burn something to make it work, and you probably shouldn’t do that inside. But what is a pizza oven?  It’s essentially a charcoal grill, in a different form factor.  It’s basically a sheet metal box with two doors on the front. The bottom door lets you access the firebox where fuel is added, and the upper door lets you add and remove food to be cooked.  There is a chimney on the top that vents it all, and it’s mounted on a little cart with two wheels and a handle.

Like most products today, this is shipped disassembled.  That’s OK – I’m used to that, as long as the assembly instructions are good, and all the pieces are there.  All the needed pieces were included, but the assembly instructions were useless.  There was very little text, instead relying on photos, which were horribly reproduced.  I basically “winged it” and referred to the product photos on the website for reference. After many trials, I still don’t think I have the door latches put together properly.  Several of the pieces had shipping damage and were bent, but the thin metal was easily straightened with a pair of basic pliers. 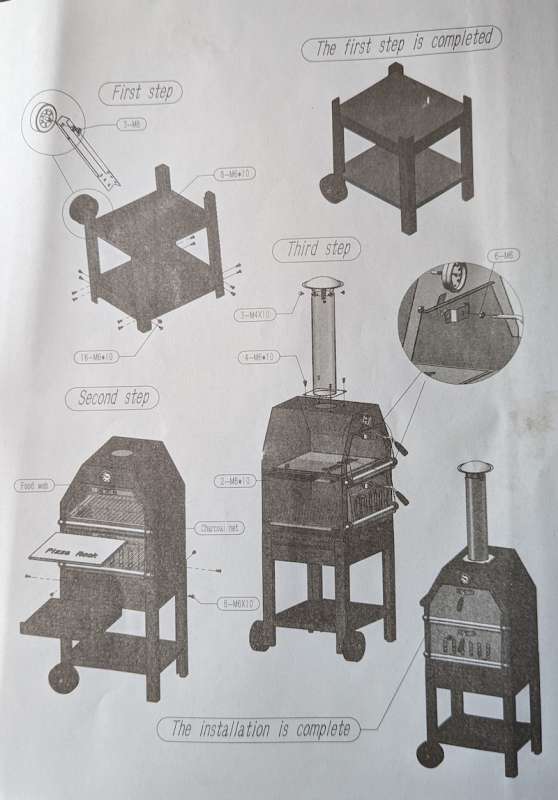 Another challenge was the fact that the stainless steel doors for the firebox and the grill still had a plastic coating on one side.  Had I fired this thing up with that in place, it would have been a fantastic mess.  I was able to get it removed, but it took about an hour and I had to take apart parts of the oven that had come pre-assembled.  I think this was a manufacturing mistake and hope that it’s not the case on all ovens.

The fact that tools, a screwdriver, and a wrench,  were included was a nice touch. However, other tools were needed to complete the assembly.  I had to use my own tools to install the wheels.  That’s not a big deal, but it’s odd to include some tools but not all.  And the wheels are not optional – it will fall over without them.

One note about the wheels – one of them doesn’t turn because the corner of the lower shelf sticks out and hits the wheel.  I was able to fix this by adding a few washers between the wheel and the mount, but this is either bad design or bad manufacturing.

This pizza oven is the love child of a wood stove and a charcoal grill. The wood stove part comes from the fact that the firebox, which is the lower part of the oven, has vents on the firebox door that you can open and close, in theory controlling the fire and thus the temperature. 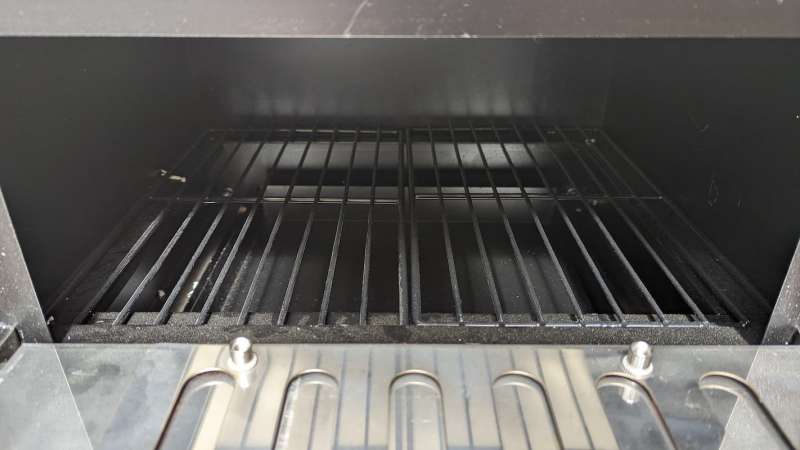 The grill part comes from the fact that food to be cooked is placed over the fire, through the top door, above the firebox. 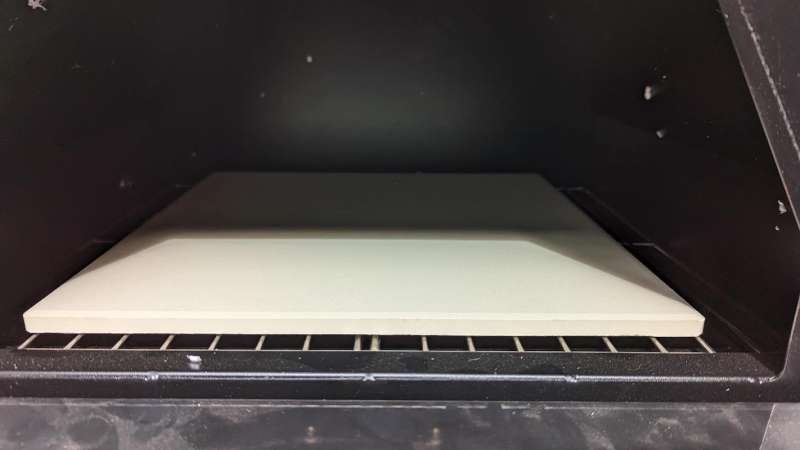 The oven includes a pizza stone that more delicate foods can be placed on, or the stone can be removed and the oven used like a grill, with the food being right above the fire.  I used the oven with both charcoal and wood.

The lower door opens to the firebox, where wood or charcoal is placed to be burned.  Below the firebox is an ash box that is removable, which makes cleanup handy. 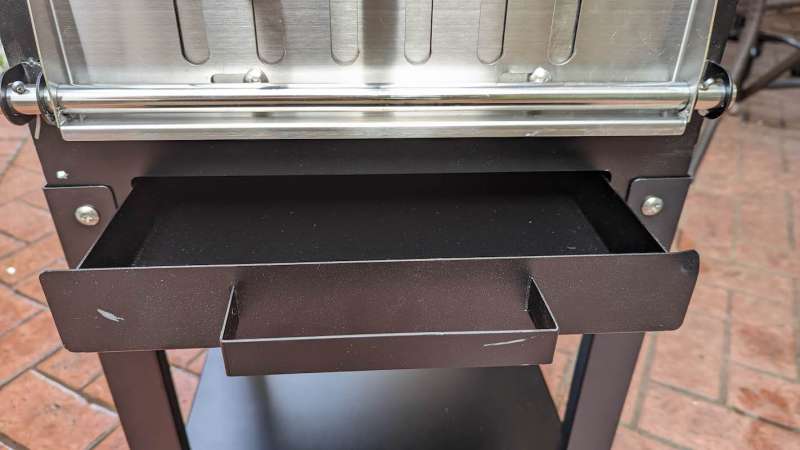 You basically use the oven by making a fire in the firebox, waiting a while until you get a good bed of hot coals, and then adding food to the upper chamber.

Let’s start with the bad.  First, whoever designed this oven seemed to forget that it gets hot. Apparently, it has an upper temperature limit of 930 deg F.  I only took mine to around 600 deg F, and the paint all burned off of the firebox.  Clearly, this was not heatproof paint, which is really disappointing.  Even cheap grills don’t burn their paint off on the first firing. 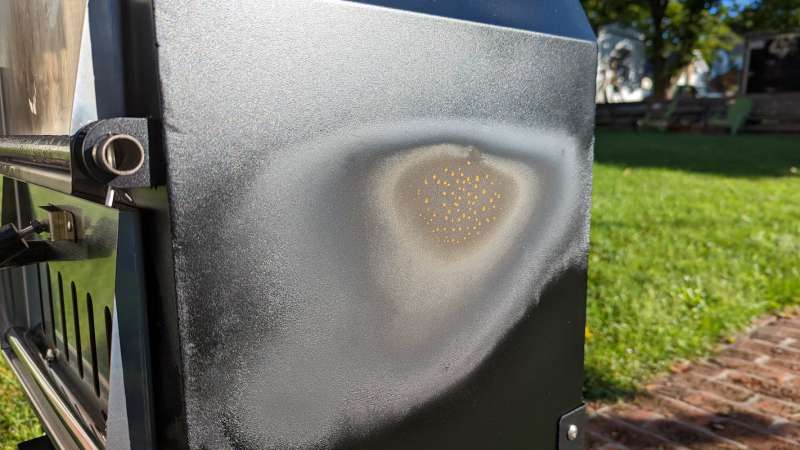 All the stickers on the oven melted and made for a gooey mess that I had to remove.  The paint on the ash pan melted and semi-welded the ash pan in place.  And finally, the handle on the left side for wheeling the oven around melted.  I’m pretty sure the whole thing would have melted into a blob had I taken it up to 930 deg F. 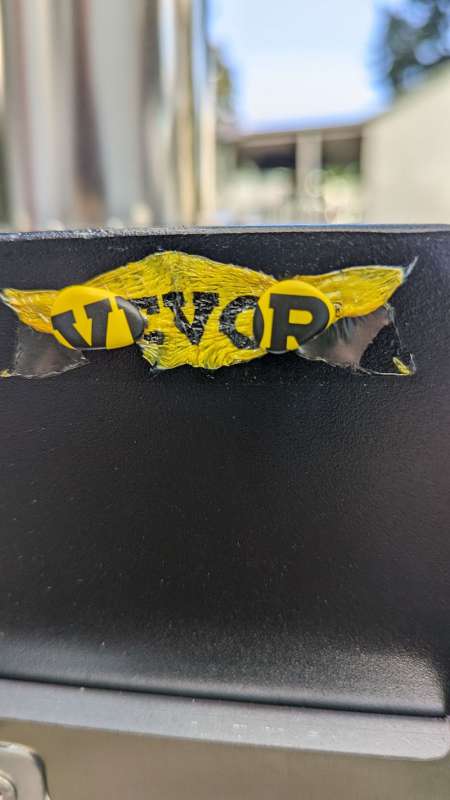 When I saw the vents on the firebox door, I expected to be able to control the fire and thus the temperature a bit. 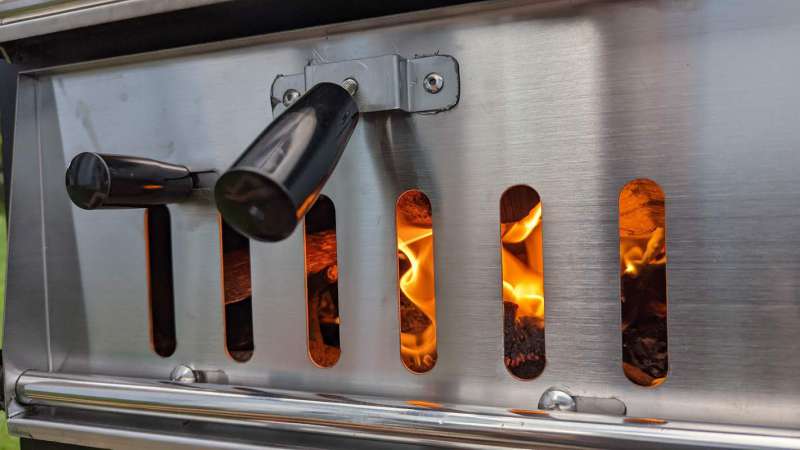 Unfortunately, this is not the case.  The oven leaks so much air that adjusting the vents on the door has no effect. For those vents to work, the doors would need to seal tight – as it is, there is about an ⅛ inch gap around the doors. 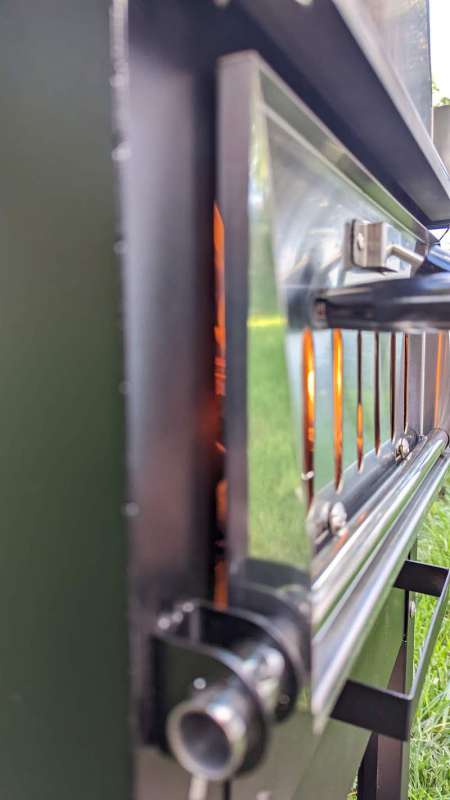 And now the good – once you get the hang of it, it can make some good food!  The first thing I tried was some simple yeast rolls, in a pan. This was over a fire of oak, that had been burning for about 10 minutes.  The temperature (according to the built-in temperature gauge) stabilized at around 450, and the rolls came out nicely, if not a little crispy on the edges and bottom. 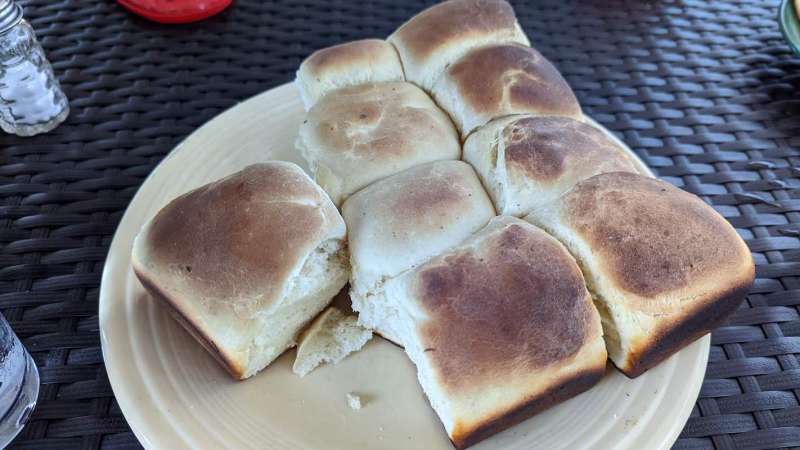 The next night, we went for it and made pizzas! 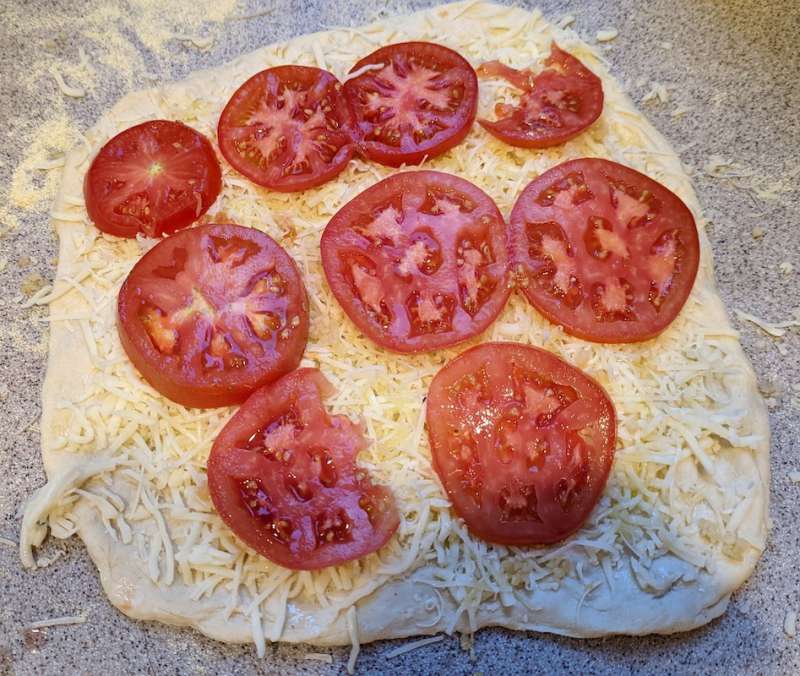 This oven is small, so your pizzas will only be about 12 inches or so, but that’s OK. I got the fire going and let it go for about 20 minutes, adding more wood a few times, to get a good bed of hot coals with an oven temp right around 550 deg.  I made the pizzas on a pizza peal and (trying to be like a pro) slid the pizza off of the peal and right into the oven.  The first time, it didn’t go well. All the toppings slid off into the oven, and the pizza remained on the peal.  There’s a learning curve to this, I’m realizing.  I was able to rescue the toppings and try again, more gently. 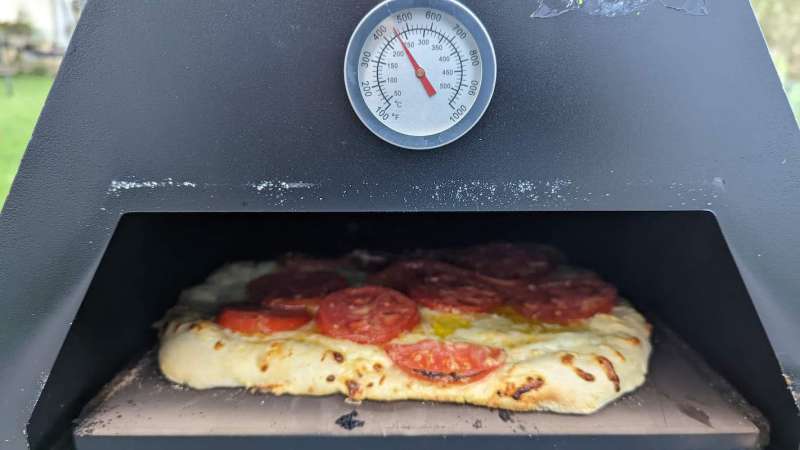 Pizzas cook in about 6 minutes – pay attention or you’ll end up with ashes!  Use a lot of corn meal on the peal to help the pizzas slide of, and use a slightly sturdier dough than you might otherwise use. 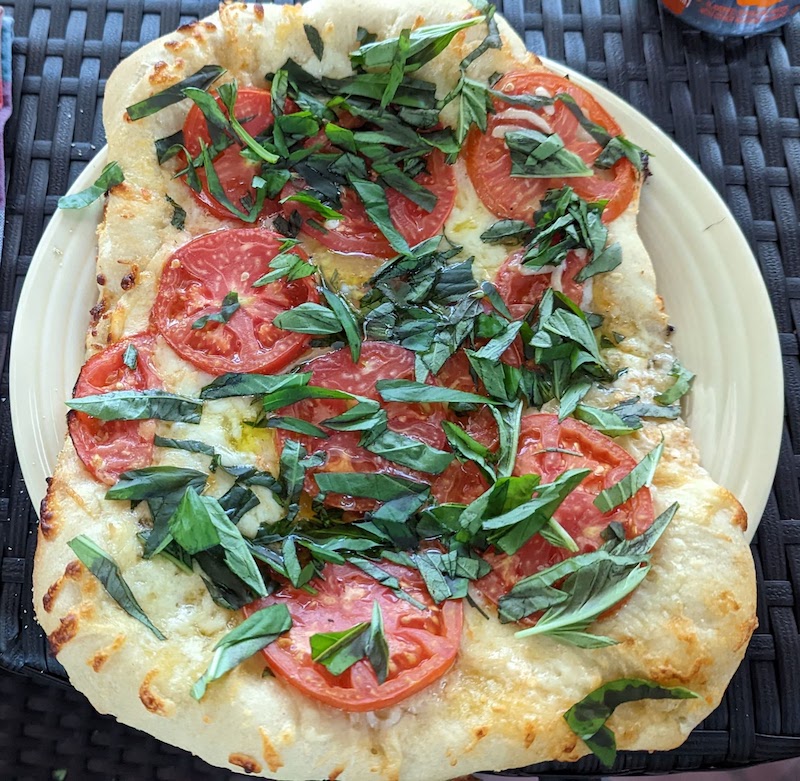 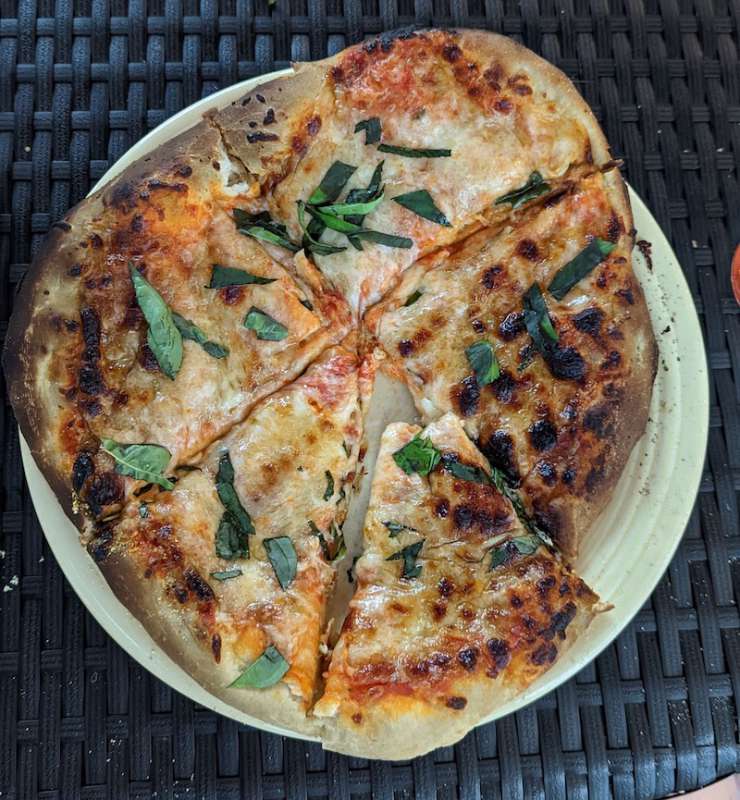 At around $160, this is by far the cheapest pizza oven I’ve seen. And it does work, but who knows how long it will last with such cheap construction.  Mine is already rusting. But the dirty secret I realized in this test (and that I subsequently tried) is that you can also make really good pizza on almost any grill.  If you have a Weber kettle grill, you can smack a 16-inch pizza stone on there and really make some nice pizza.  Same for a gas grill, but you’ll likely need a smaller stone. So do you really need a pizza oven?  Maybe.  This one does work pretty well, once you get past all the drawbacks. But if you already have a nice grill, I’d try that first.  You might be surprised.

Price:  $159.99
Where to buy: Vevor or Amazon
Source: The sample for this review was provided by Vevor.