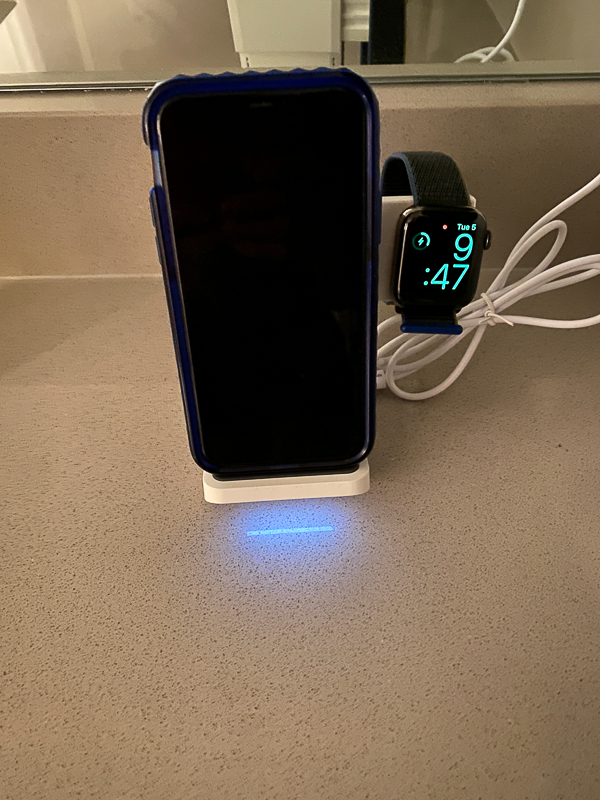 REVIEW – There are literally hundreds of wireless charging devices out there for your phone and various accessories like earbuds and watches.  The ones that can handle multiple devices are often bulky and not the type of thing I want to pack in my suitcase for travel.  The STM Goods ChargeTree Go portable wireless charger claims that it can charge your phone, watch, and earbuds in a single device and pack up compactly for travel.  In the hopes that someday I will get to travel again, I chose to review it and see how well it performs.

The STM Goods ChargeTree Go portable wireless charger is a wireless charger (not Magsafe) that will charge your phone, iPods, and Apple watch on a single device while still allowing itself to fold up compactly for travel. 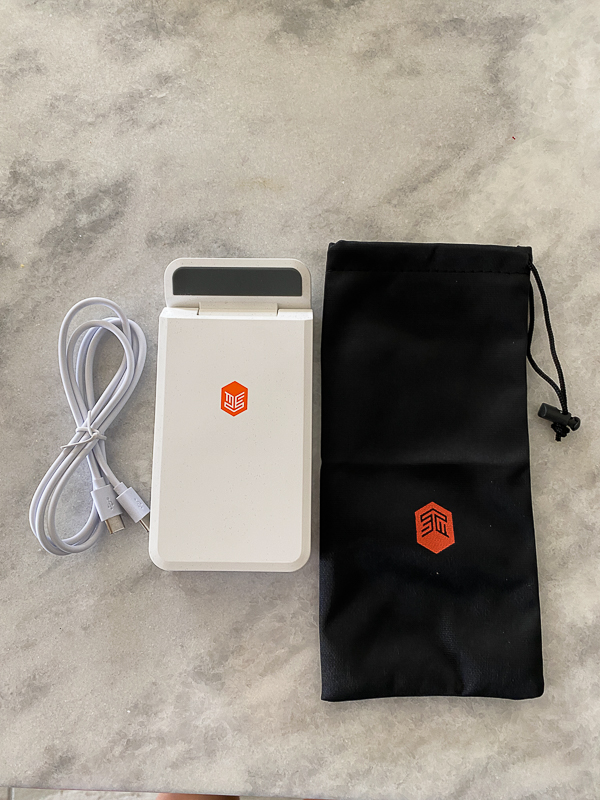 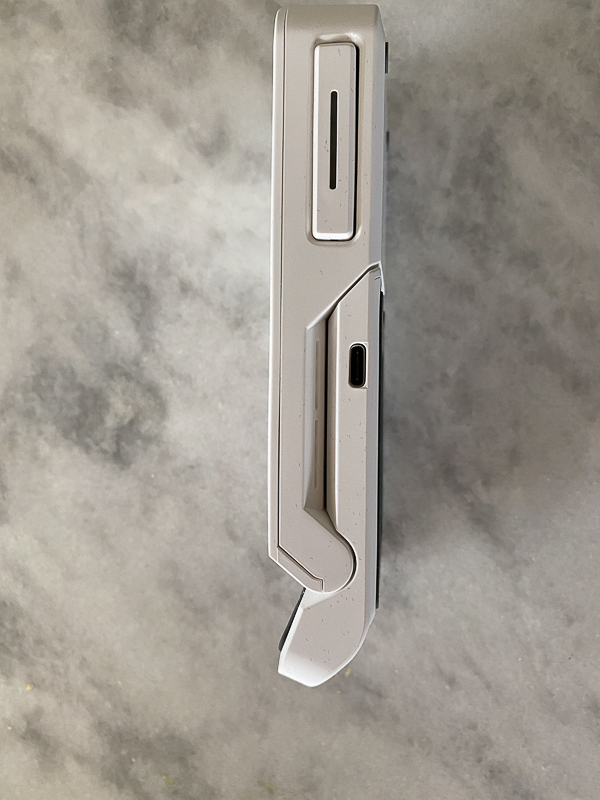 These first few pictures show the STM Goods ChargeTree Go portable wireless charger completely folded up and ready for travel.  The first picture above shows you the right-hand side of the device.  Working from the top down, you can see the section that will pop out to allow for the charging of the Apple watch.  The slit on the side of that popout is an LED light strip that lights up to indicate that the watch is charging correctly.  Below the pop-out is the USB-C port where you would plug the cable to power the device.  The right-hand section with the USB-C port will form the device’s base. 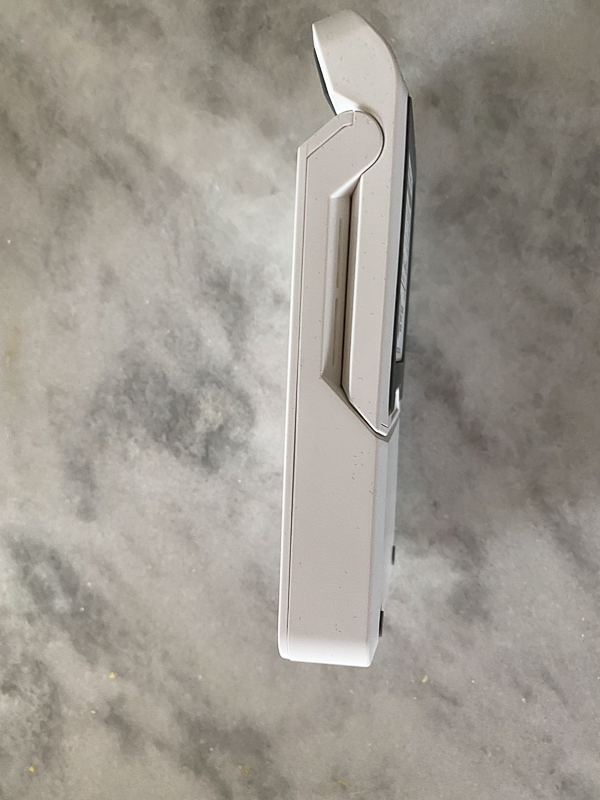 The left side of the charger has no extra ports or features. 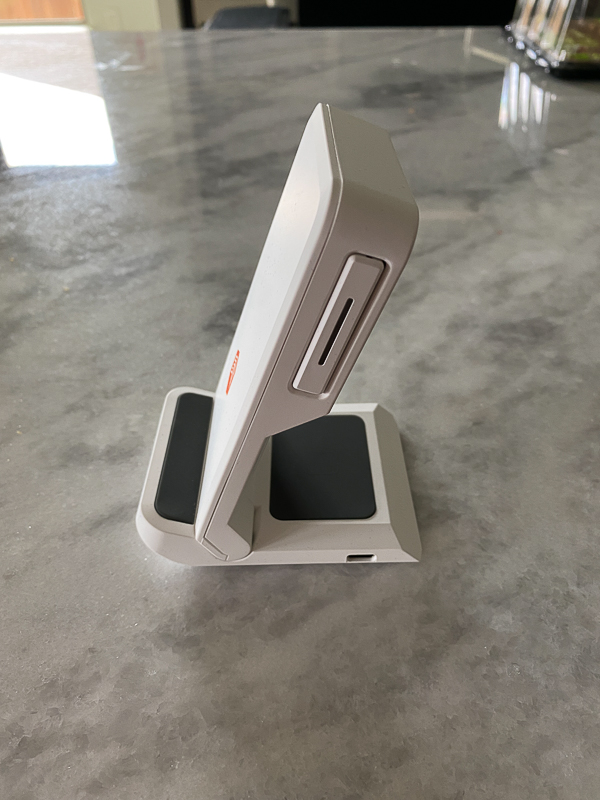 The picture above shows the STM Goods ChargeTree Go portable wireless charger’s base flipped down with the phone charging pad ready to accept a phone for charging.  I did note that you can still charge the phone with the device completely folded up.  You just have to be careful about placement on the device to ensure you have a good charge.  Flipping the main pad up forces you to center the phone correctly on the base. 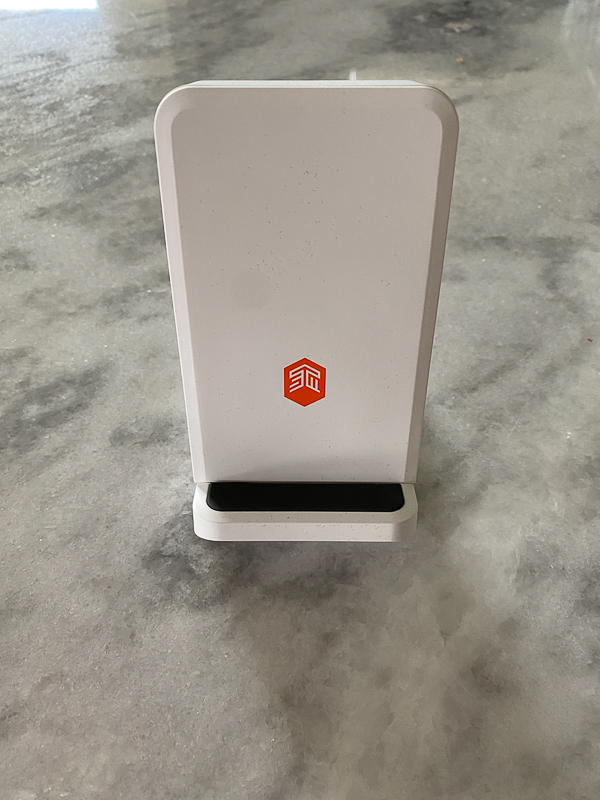 Here you can see the charging station from the front with the phone charger flipped up and the watch pop-out still inside the charger. 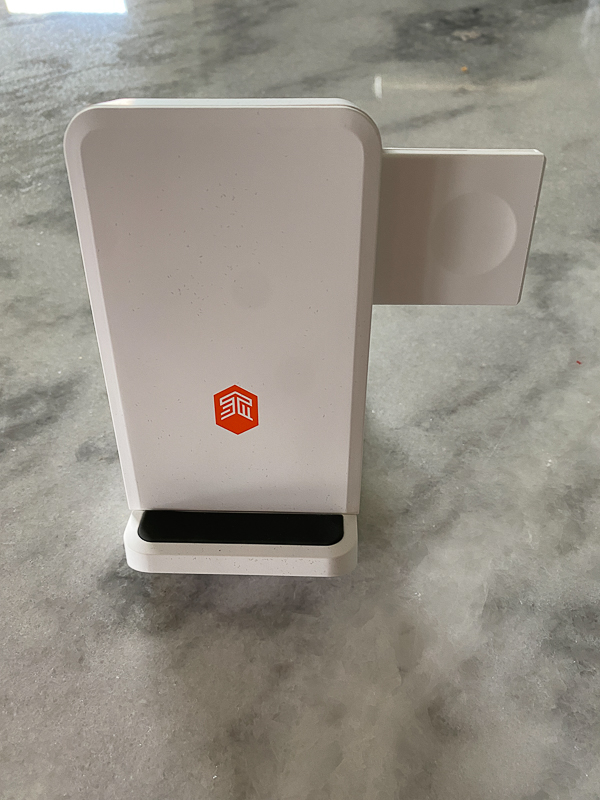 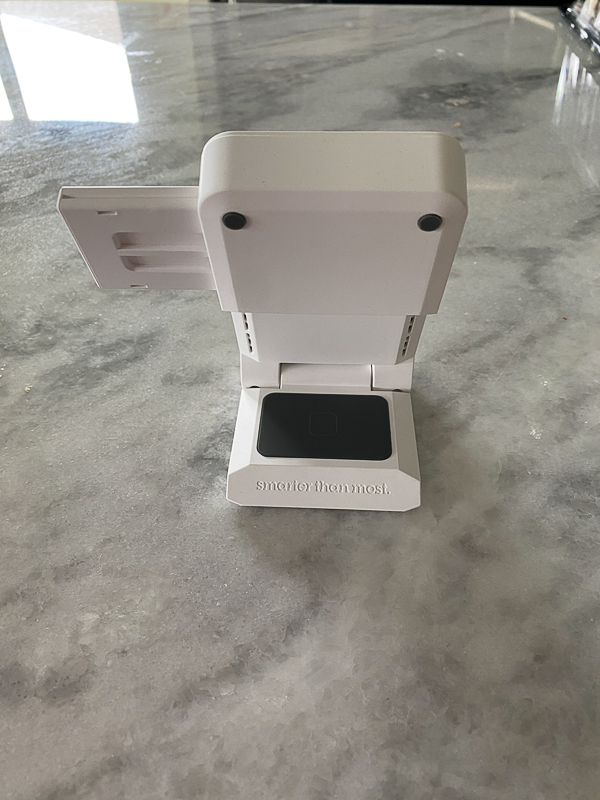 Here is a picture of the back of the STM Goods ChargeTree Go portable wireless charger with the watch charger popped out.  You can now see the pad available to charge the iPods.  You can also see two rubber feet at the top of the charger.  This allows the charger to sit flat if it is not unfolded on your tabletop and allows you to charge the phone flat. 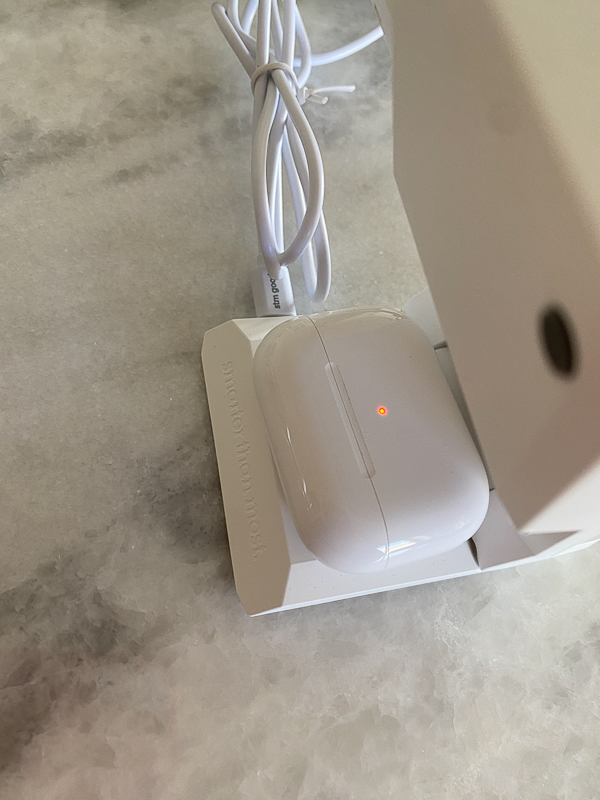 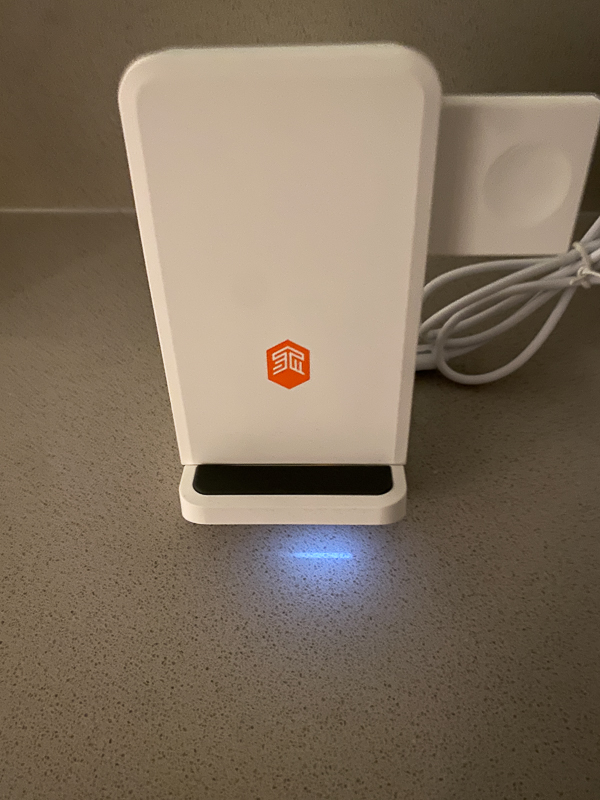 The two pictures above show some AirPods being charged.  There are two LED lights under the front of the main charging pad.  When the back pad is first used, the right LED will light up solidly for a few minutes to indicate that the device is charging correctly.  If it flashes, you have positioned it incorrectly, or something is wrong with the device.

Finally, I have a picture with a phone (iPhone 11 Pro), Apple Watch, and iPods all charging simultaneously.  Notice the LED on the left side at the bottom of the main charger is now lit. That left LED will light solidly to indicate successful initiation of charging for your phone.   It will flash if there is an issue.  The LED lights go out after a few minutes, which is nice if you keep it in your bedroom.

I really wanted to love the STM Goods ChargeTree Go portable wireless charger.  Its specs are awesome, and it packs down small for travel.  However, I ran into some technical difficulties with the device.   First off, this charger does not come with a power plug.  It requires at least a 20-watt/2.2 amp power plug.  I did not read the fine print at first, and I grabbed the first USB-C power plug I could find out of my drawer.  It charged just fine the first night, but the next night I woke up the next morning to find my phone was not charged at all.  My watch and iPods were charged, but not the phone.   I found a charger that was 20 watts and tried again.

Once again, I had the same issue.  It charged everything fine the first night.  The second night, my phone was left uncharged.   I read the fine print on that charger and saw it only has 1.4 amps.  So I decided to go all out, and I bought a 65-watt up to 4 amp plug.

Again I had the same issue.  The first night it was fine, and the second night the phone was left uncharged.  I thought maybe I was bumping my bedside table during the night and knocking the phone slightly off the optimal charging base.  So I moved the charger to a dresser and new outlet where I knew nothing would bump it during the night.   Again the first night worked like a charm, with the second night leaving my phone uncharged.

I have now realized that I have an issue with my charger.  If I unplug the USB-C from the charger and plug it back in every night, I can get a good charge on my phone.  The charger always reports a solid LED when I first put the phone on the charger.  If I can stay awake for about 20 minutes or so, I can see the charger start to flash the left LED.  I sent an email to STM support but never got a response.  I finally called STM the other day, and they asked if I had put in a warranty request.  That was nice, as they were willing to replace the device immediately.

However, since I had the device for review, I did not have an order number to reference.  I was told the manager would call me back.   It has been two days, and no call back yet.   I will update this review if and when I get a call back from STM.   I will most likely try to call them again.

What needs to be improved

I really wanted to love the STM Goods ChargeTree Go portable wireless charger because it folds nicely and is even compact on my dresser.  However, due to issues I am having with it and the hoops I have to jump to get my phone to charge, I hesitate to recommend it.  I also wish they had included the plug for the device.   I will note that in the past week, I have seen the price of the device go from $119 to $79 on the STM site.  You can easily spend another $20 or more to find a plug for it.  If I get a replacement device, I will update this review accordingly.

I received a new ChargeTreeGo from STM about a week after sending my old one back with an RMA.  They also sent me the additional power plug you can purchase.   I used their plug and new charger on the same outlet I had used.  I had no issues charging my phone, watch, and iPods for three nights.  I then changed the plug out for the last plug I bought in this review.  Once again, I had no issues with the charger.  I must have had a bad device to review.  They were very prompt with the replacement, and their website has a location to handle RMA returns.  I highly recommend this charger and will be looking forward to taking it on our vacation next month.

Price: $79
Where to buy: STM Goods and Amazon
Source: The sample of this product was provided by STM Goods.